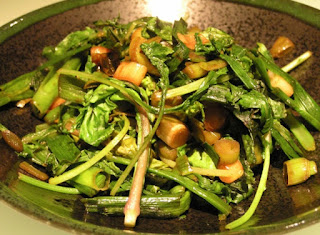 Amarais a broad-leafed, bushy plant that grows about six feet tall. Amaranth is a plant used in herbal remedies that are found in your garden or in the wild and may provide a unique traditional health benefit reducing blood pressure and cardiovascular disease.

Amaranth plant is an important plant to the nutrition lives of Africans. Leaves and young plant stems are cooked like spinach and have a mild flavor and the seeds of the Amaranth plant are ground into flour.

Amaranth produces a brightly colored flower that can contain up to 60,000 seeds. Also known as, Chinese spinach or callaloo in Caribbean cooking, amaranth is a green leafy vegetable and is widely grown across East, West and Southern Africa.

Cook and serve amaranth leaves in a similar way to spinach or Swiss chard - boiled, steamed or fried. They only need brief cooking. Cooked Amaranth plant leaves are eaten as vegetables, soups, stews, and relishes.

Amaranth Recipe Directions
In a large skillet over high heat, when skillet starts to smoke add oil and onions. Cook for 3 minutes. Season with salt and pepper, add the garlic and hot pepper, cook 2 minutes more, and then add the amaranth in batches until it has completely collapsed. Add water if too dry, and continue to cook about 15 minutes more.

Amaranths are easy to grow plants

Starting from a tiny seed, Amaranthus hybridus plants can produce tasty spinach-like greens in 5 weeks or less, can continue to produce a crop of edible leaves weekly for up to 6 months, and will then yield thousands of seeds to guarantee their survival.

In favorable locations they can reseed themselves automatically and continue to produce a useful crop almost without attention. In the tropics, amaranths can produce year-round. For little effort, they afford a nutritious dish with abundant β-carotene and retinol.

Normally, the leaves including the terminal and softest portions of the shoots are stripped from the stems and washed and boiled in several changes of water for 10 to 15 minutes. They are rinsed again, and the cooling water is discarded to remove part of the oxalic acid.

The leaves may then be served as a side dish or combined with other foods to make stews. In West Africa, they are pureed and combined with other ingredients in a sauce that is used with starchy vegetables. Different amaranth varieties have different flavors.

Amaranths grown for seed are not usually harvested for greens, although light-harvesting of leaves can be done without significantly changing seed yields. Seeds for regenerating the leafy varieties are produced by leaving especially vigorous plants unharvested.

Such seed plants are watched carefully after flowering. When mature seeds can be rubbed from the flower head, the plants are cut and removed for drying and threshing. When thoroughly dry, the flower head is rubbed, sometimes on a screen, to loosen and remove the small seeds.

These may be separated from the chaff with fine screens and, if necessary, by winnowing. The amaranths used for edible grains are less likely to shatter than plants of leafy varieties grown for seed. The dried flower heads are hungover cloths and beaten to release the seeds. The seeds are then screened, and the cleaned seeds are stored until used.

Did you know?
Amaranthus hybridus commonly called green amaranth or smooth pigweed is a species of an annual flowering plant. Below are the rank and common name classification: