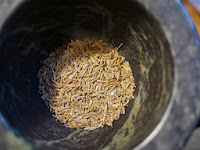 
Cumin seeds are sometimes used whole, but more commonly they are ground into powder.

Cumin has an unmistakable flavor, when a dish is flavored with cumin; it has a nutty peppery slightly smoky flavor.

Where does cumin come from?

Cumin is one of the earliest cultivated herbs in Africa. Cumin is a low-growing annual herb of the Nile valley, but cultivated in the Mediterranean region, Arabia, Egypt, Morocco, India, China, and Palestine from very early times and is a strong tasting herb.

How does cumin grow?

Cumin can grow outdoors, in containers, and hydroponics. Cumin plants are known to attract beneficial insects. The plants mature in about 2 - 3 months, when the stems are cut and dried in the shade. Cumin is grown for its seeds that are used whole or ground. To harvest seeds, allow pod to ripen and turn brown. Remove from the plant and dry. Rub pods to remove the seeds. The whole stem can be cut and hung upside down in a bag to collect the seeds. Use fresh or store in an airtight container.

What is cumin used for?

Cumin is a common spice in Middle Eastern, Indian, and Mexican cuisines as curry powder and in pickles, pastry and soups. The seeds should be roasted before being used to bring out the aroma.

What are other uses for cumin?

Those who take cumin as a medicine do so for digestion problems including diarrhea, gas and as a diuretic. Cumin may also lower blood sugar levels. Cumin seeds are rich sources of essential oils and have been actively researched for their chemical composition and biological activities. In the Moroccan traditional medicine, cumin seeds are used as diuretics and given to treat diabetes and hypertension. In traditional medicine of Tunisia, cumin is given to new mothers to increases milk supply and as an antiseptic.

Did you know?
When using whole cumin seed, toast the seeds in advance to get the best flavor possible.
African food