Ever wonder why turtles live in water?

Turtles spend most of their lives in the water and the African folktale, why turtles live in water explains the reason why.

Turtles spend most of their lives in the water paddling along with webbed feet or streamlined flippers. Sea turtles almost never leave the ocean, except to lay eggs in the sand. Freshwater turtles live in ponds and lakes climbing out of the water only to lay out in the sun on logs or rocks, but why? The African folktale, why turtles live in water explains the reason why. 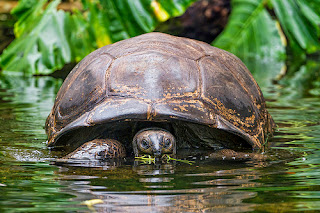 Why Turtles Live in Water is a captivating African folktale.
Turtles used to live on the land, they say, until the time a clever turtle was caught by some hunters. They brought him to their village and placed the turtle before the Chief, who said, "How shall we cook him?"

"Excellent idea," said the Chief. They took the turtle to the river and threw him into the water to drown him. They were congratulating themselves on their success in drowning the turtle, when two little green eyes poked up in the water and the laughing turtle said, "Don't get those cooking pots out too fast, foolish people!

As he swam away he said, "I think I'll spend most of my time from now on, safely in the water." It has been that way ever since!