Attiéké is a traditional Côte d'Ivoire African dish made from fermented ground cassava roots that Ivorians love to eat. The most popular recipe, attiéké poisson grille, fried fish prepared with sliced a tomato and onion salad is a Côte d'Ivoire national dish. 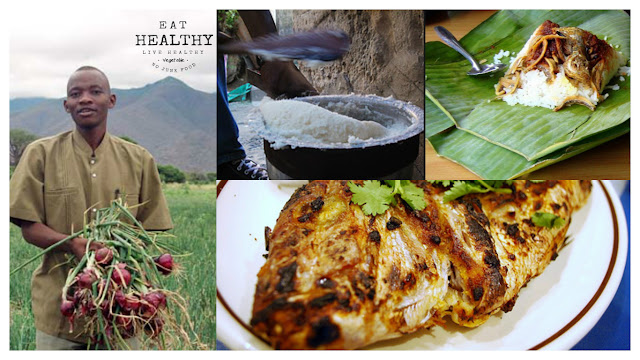 Homemade attiéké looks like couscous and prepared correctly takes two days to make from scratch. Making it involves peeling and grating cassava to make a paste that is mixed with a small portion of already fermented paste. The mixture is left to sit for a day or two and ferment. The paste is then dried in the sun and steamed serving.

Côte d'Ivoire in Africa attiéké (pronounced atchekay) recipe has traveled far beyond the country’s borders to become a well-loved food in the African diaspora and beyond.

Directions:
Moisten attiéké with water and steam 20 minutes. When tender, transfer attiéké to a bowl; add salt and vegetable oil and mix with a fork, so that the grains do not stick.

Put the Attiéké dish together:

Serve fish with onion sauce over attiéké and with a side salad.


Some African food recipes are a mystery and a fascination for most of the modern world. Some African communities sometimes live without many modern kitchen appliances and comforts the rest of us take for granted.  African food culture had long relied on oral transmissions and not written recipes, Africa has a rich food history and culture, but sad to say, many recipes are not documented in writing.