What is the food like in Africa? If you like French, Italian, English, Caribbean, American, Spanish, Dutch, and native foods; you will love African food.

In Africa, you will find dishes influenced by people who lived there for millions as years as well as major influences from cultures that colonized Africa and newly established fast food chain restaurants.

In addition, with a range of climates and growing conditions, the ingredients for African cuisine are diverse. It is impossible to group African food into one category.
Food recipes of a community are often closely related to where they live as well as the increasing urbanization of African populations. Large well-known American retail and fast food companies see South Africa as a gateway into the growing African market.
Seattle Coffee has been operating in South Africa since 1996, Cinnabon launched in South Africa in 2006 looking to open stores in Egypt, Libya, and Morocco.
Krispy Kreme is opened in Johannesburg November 2015 looking to expand to Kenya, Nigeria and Ghana. Dunkin Donuts has also announced plans to set up shop in South Africa in 2016.
Generalizations about African food are not helpful in describing a subject as complex as diets, which depend on many economic, environmental, social and cultural factors. 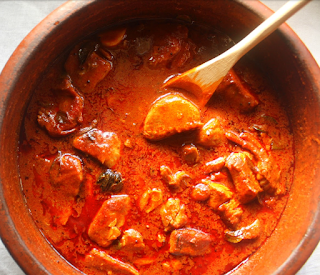 African food recipes are usually based on a carbohydrate staple served with soups, relishes and sauces, which may or may not be spicy, prepared from a wide variety of other ingredients.
With local influences, colonization and a growing fast food market, there is no way to precisely describe African food except, the food of Africa reflects its history and future.
Make Southern African Tilapia Stew
Ingredients
4 tilapia fillets
2 teaspoons South African smoke seasoning blend
2 lemons, juice only
4 garlic cloves, crushed
1 large carrot, sliced into medium rounds
2 green bananas or plantains, peeled, sliced to 2cm/1in rounds
2 chayote, peeled, sliced into medium chunks
1 yam, peeled, sliced into medium chunks
1 hot pepper
6 spring onions, chopped

Directions
In a large bowl, mix seasonings with the lemon juice until dissolved. Bring 3 cups of water to the boil in a large saucepan and lemon juice marinade, garlic, carrot, green bananas, chayote, hot pepper and yam and simmer for 10 minutes, or until vegetables are slightly tender. Add fish fillets continue to simmer 5 minutes. Add the spring onions and serve.
African food facts to remember.
African food recipes vary from village to village, town to town, city to city and the 54 African countries on the African continent have its own food influences.
African food recipes are usually based on a carbohydrate staple.
It is impossible to group African food into one category.