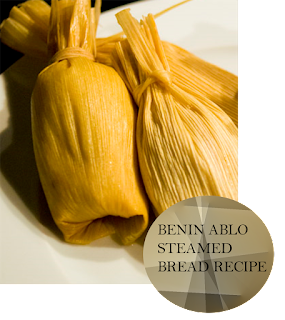 Ablo steamed bread African food recipe takes a few days to complete in order for the dough to ferment giving ablo a unique sourdough flavor. After fermentation, the ablo is wrapped in cornhusks and steamed.

Directions
In a large bowl, combine the cornmeal and salt with just enough warm water to form stiff dough. Cover the bowl with a clean cloth. Set in a warm place for two days to ferment. Using prepared fresh or dry corn-husks brushed inside with oil, place dough in the middle of husks making sure the husk is curling around the dough. Place a second husk over the first and tie the ends with string or fold under the ends. Use a food steamer to cook aboloo or steam, tightly covered, over briskly boiling water for 20 minutes. Leftover aboloo can be frozen.


Aboloo is a steamed fermented cornbread recipe from Ghana which is made in the same way as Benin and Togo Ablo. Aboloo and Ablo is eaten with a variety stews and soups.