East Africa
In East Africa, many hundreds of years ago, the Arabs settled on the coast, and Arabic influences are especially reflected with the use of sweet spices such as cinnamon, cloves and nutmeg. The British and Indians brought with them to Africa their curries and the technique of pickling to East Africa. Asians introduced citrus fruits such as oranges, lemons, and limes. Portuguese introduced items like chili's, pineapples, and bananas.

Central Africa
Central Africa’s influence comes from the introduction of cassavas, peanuts, and pepper plants that arrived along with the slave trade.

Western Africa
In West Africa the Portuguese, French, and British influenced regional cuisines with the introduction of plantains, citrus and pineapples, which are legacy of slave ship traffic between Africa and North America. African soups and stews contain ingredients from fruits, vegetables, beef, lamb, chicken, shrimp, and fish from African coast to coast.

What to cook in the crockpot slow cooker? Make South African Chutney Chicken tonight for the family. 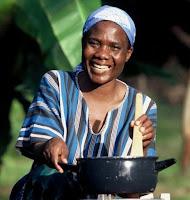 In a 3-qt. slow cooker, combine ingredients. Cover and cook on low for 4 hours or until chicken is tender and serve with cooked couscous.