Use breadfruit as a potato substitute for French-fries, select a firm to the touch breadfruit. French-fried breadfruit has a taste similar to potatoes. 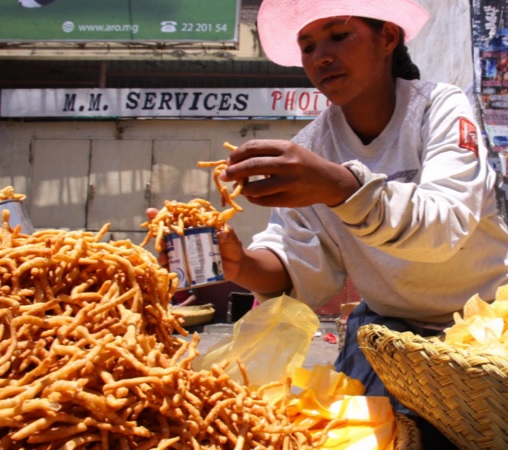 The breadfruit flesh is firm and creamy white or pale yellow. Breadfruits are large, cantaloupe-sized fruit, usually yellow-green in color, with hard, starchy white flesh similar to a potato. Skin texture ranges from smooth to rough to spiny. Breadfruit is enjoyed and grows throughout Tropical Africa.

Serve fresh hot breadfruit fries with ketchup, mayonnaise, mustard, cheese chili, the choices are endless. Tip: Treat breadfruit as you would a potato.

In a large frying pan add oil until it reaches 300 degrees or is hot enough to your liking if you are an expert French fryer. Peel the breadfruit; remove the core, cut into French fry-sized strips and add in a small amount to the oil. Fry for 5 to 6 minutes, turning occasionally until golden brown. Transfer to paper towels, season with salt and serve with ketchup, mayonnaise, mustard, cheese chili, the choices are endless.


According to tropical breadfruit, the following countries are suitable for the cultivation of breadfruit based on temperature and rainfall.