Why Turtles love rain and live in water is a truly captivating African folktale. African folktales are stories forming part of an oral storytelling tradition shaped by the tongues of African elders passed down from one generation to the next. 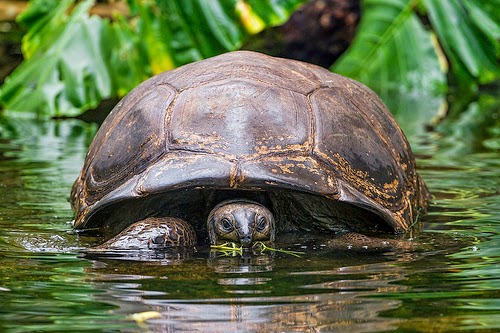 Two superpowers, Elephant and Rain had a dispute.

Elephant said, “If you say that you nourish me, in what way is it that you do so?”

Rain answered, "If you say that I do not nourish you when I go away, will you not die?” Hurt, Rain then left.

Vulture said, “I will not."

Then Elephant said to Crow, “Go tell Rain to make rain for me!” who answered, “Give the things and I will ask."

Crow summoned Rain and rain fell. It rained at the lagoons, but they dried up, and only one lagoon remained.

Elephant needed to find food; he summoned Turtle to watch over the only remaining watering hole.

Elephant said, "Turtle, remain at the water!" So, Turtle was left behind when Elephant went hunting for food.

There came Giraffe, and said to Turtle, *' Give me water! “Turtle answered, “The water belongs to Elephant."

There came Zebra, who said to Turtle, “Give me water!” Turtle answered, " The water belongs to Elephant."

There came Wildebeest, and said, “Give me water!” Turtle said, “The water belongs to Elephant."

There came Goat, and said to Turtle, “Give me water!” Turtle answered, “The water belongs to Elephant."

There came Jackal, and said to Turtle, “Give me water!” Turtle said, “The water belongs to Elephant."

There came Lion, and said, “Turtle, give me water!” When Turtle was about to say something, Lion got hold of him and beat him; Lion drank all of the water.

When Elephant came back from hunting, he said, "Turtle, where is my water?” Turtle answered, “The animals have drunk the water."
Elephant asked, "Turtle, shall I chew you or swallow you whole?” Turtle said, "Swallow me, if you please!” and Elephant then swallowed him whole.

After Elephant had swallowed Turtle, and entered his body, he tore Elephant’s liver, heart, and kidneys to shreds. Elephant said, "Turtle, you killed me!"

So Elephant died but Turtle came out of his dead body alive and well.

Rain was pleased with the cunning of Turtle, he filled all the rivers and lakes to overflowing allowing Turtle to live in his waters forever.

Have you ever wondered
Why you do not tell the person who is carrying you that he stinks? Well, read this true African proverb quote.