Learn all info about the African country of Senegal and make the best two Senegalese chicken recipe and stuffed fish recipe.

Thieboudienne is an African seafood recipe from Senegal of stuffed fish and seasoned rice cooked in a thick vegetable tomato-based sauce. 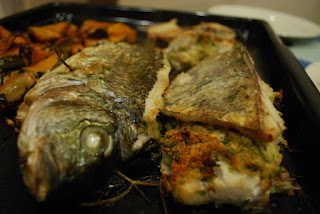 Stuff fishes with 1/2 the onions, garlic, tomatoes and parsley. In a large pot, sauté onion and add the tomato paste. Cook over low heat 2 minutes and mix with stock. Add vegetables, seasonings, and rice. Add fish on top of mixture cover and simmer 30-35 minutes. Serve with homemade bread.
About Senegal

Senegal’s economy is driven by tourism, mining, construction, fisheries, and agriculture, which are the primary sources of employment in rural areas. Around 70 percent of Senegal lives in rural towns.

The cost of electricity is a chief constraint for Senegal’s development. Electricity prices in Senegal are among the highest in the world. Power Africa, a US presidential initiative led by USAID, supports Senegal’s plans to improve reliability and increase generating capacity.

Of the nearly 16 million people living in Senegal, the population without electricity is 6 million or 35% of the population. Ninety percent of urban areas have electrification compared to 43% in rural areas.

30 Informational stats and facts on Senegal

2. Senegal is slightly smaller than the US state of South Dakota.

5. Senegal's nationality is Senegalese using both the singular and plural form.

6. Senegal's capital is Dakar that was home to the Dakar Off-Road Rally until 2009 when the race moved to South Africa.

8. The Dutch established a slave port on the island of Goree in 1588 and years later in 1659 it became a key slave trading port.

9. During the Seven Years War 1756–1763, Britain took over French posts in Senegal forming the colony of Senegambia.

10. Slaves, ivory, and gold were exported from the coast during the 17th and 18th centuries.

11. Born in SenegalGambia in about 1753, poet Phillis Wheatley was brought to Boston, Massachusetts, on a slave ship in 1761 and was purchased by John Wheatley as a personal servant to his wife.

12. The French colonies of Senegal and French Sudan were merged in 1959 and granted independence in 1960 as Mali Federation.

13. In 1960, Senegal exerted its independence from under French rule as an independent nation.

14. The 40-year reign of Senegal's Socialist Party came to a diplomatic end in the 2000 elections.

15. Senegal’s Patriotic Symbol the African Renaissance Monument is to symbolize the achievement of Africa but some have serious issues with the nudity and symbolism of the 164-foot statue.

16. The statue depicts a very muscular man, holding a baby in one hand, leading a voluptuous woman with one exposed breast and supple thighs with the other.

17. Climbing the 216 steps to the African Renaissance Monument you would not immediately discern that local African artists feel unfairly denied the chance to work on a project of national pride.

18. Located in the Senegalese capital of Dakar the African Renaissance Monument cost millions to create, $27 million dollars to be exact.

19. The Senegalese Ex-President, unable to pay the $27 million price tag on the work, gave real estate to North Korea’s Mansudae Overseas Project, which later sold the land at profit in exchange for the statue.

20. Languages of Senegal may not surprise you since Senegal was once a French colony, the official language is French, and the other major languages are Wolof, Pulaar, Jola, and Mandinka.

21. Wolof is a language spoken in Senegal, The Gambia, and Mauritania, and it is the indigenous language of the ethnic grouping of the Wolof people.

22. Wolof is the most widely spoken language in Senegal even though the official language is French.

24. Senegal is named for the Senegal River that forms the northern border of the country; many theories exist for the origin of the river name; perhaps the most widely cited derives the name from "Azenegue," the Portuguese appellation for the Berber Zenaga people who lived north of the river.

25. Independence Day is April 4 in Senegal.

26. Senegal’s president is directly elected by absolute majority popular vote in two rounds if needed for a 5-year term.

27. Léopold Senghor was a poet, teacher, and diplomat, first president of Senegal, and a major proponent of the concept of Negritude.

29. Drafted in 1939 at the beginning of World War II, Senghor was captured in 1940 and spent two years in Nazi concentration camps.

Now that you know all the stats and facts about Senegal, let's taste the food by making one of the national dishes of Senegal, Senegalese Thiebou Guinar Chicken.

In a large pot with a lid over medium-high heat, add oil and chicken. Brown chicken for 3 minutes and remove from pot.

Add vegetables, and spices to the chicken pot. Cook until onions are slightly soft. Then add chicken, fish, and broth.