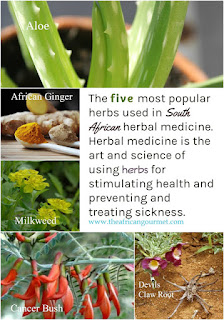 Aloe leaves are traditionally used for stomach complaints, arthritis, eczema, conjunctivitis, hypertension, and stress. They are also used to treat skin irritations and bruises. Aloe produces two substances, gel and latex, which are used for medicines.

Aloe gel is the clear, jelly-like substance found in the inner part of the aloe plant leaf. Aloe latex comes from just under the plant's skin and is yellow in color.

The roots of devil's claw have been traditionally used for treating diseases of the liver, kidneys, and bladder. It can also be used to stimulate appetite, and for indigestion. There is some moderate evidence that devil's claw, an herb native to Africa, is beneficial for osteoarthritis of the spine, hip, and knee.

Devil’s claw, scientifically known as Harpagophytum procumbens, is a plant native to South Africa. It owes its ominous name to its fruit, which bears several small, hook-like projections.

Traditionally, the roots of this plant have been used to treat a wide range of ailments, such as fever, pain, arthritis, and indigestion.