The roots of hockey in Africa

The roots of hockey are deeply rooted in Africa's Egyptian and Ethiopian ancient sports.

African hockey history shows that a form of hockey was played in Egypt 4,000 years ago and in ancient Ethiopia 1,000 years BC.

The roots of hockey in Africa

Khumalo was opened on September 13, 1995 built by Zimbabwe’s Ministry of Public Works who in turn handed the administration over to the Sport and Recreation Commission to manage on behalf of the Zimbabwe Government. Seif Ahmed is the current President of the African Hockey Federation; Vice Presidents are Nii Quaye-Kumah and Ginny Ross,

The African Hockey Championships is the African continent main tournament, organized by the African Hockey Federation with a history dating back to 1974; winning teams are guaranteed a place at the next Hockey World Cup or Olympics.  However, South Africa won the continental qualifier however, the team did not participate in the 2016 Olympics.

South African Sports Confederation and Olympic Committee (SASCOC) and South African Hockey Association (SAHA) made an agreement on the Rio 2016 Olympics qualification criteria that the Continental Qualification route would not be considered. As a result, New Zealand, as the highest-ranked team from the 2014-15 Hockey World League Semifinals not already qualified, participated instead.

Field hockey at the 2016 Summer Olympics in Rio de Janeiro took place from August 6th to 19th at the Olympic Hockey Centre in Deodoro. Twenty-four teams, twelve each for men and women competed in the Field hockey tournament.

Ghana women’s team had hopes of qualifying for the 216 Rio games with the backing of The Fédération Internationale de Hockey or International Hockey Federation, commonly known as FIH. The women's senior national hockey team was been training at the Theodosia Okoh National Hockey Stadium in Ghana's capital Accra. 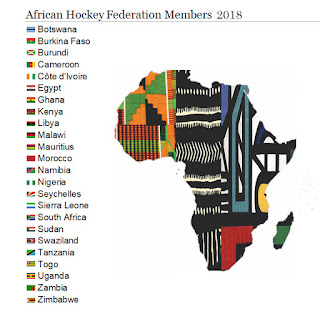