African Countries and Capitals That Begin with M Word Search 

Feed your brain with African geography. 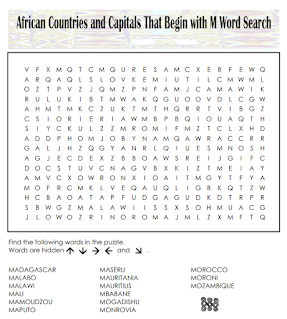 African Countries that begin with M

1.   Madagascar is the fourth-largest island in the world officially known as the Republic of Madagascar, is an island country in the Indian Ocean, and is located in the coast of Southeast Africa.

2.   Malawi is landlocked; Lake Nyasa, some 580 km long, is the country's most prominent physical feature; it contains more fish species than any other lake on earth.

4.   Mauritania is considered both a part of North Africa's Maghreb region and West Africa's Sahel region; most of the population is concentrated in the cities of Nouakchott and Nouadhibou and along the Senegal River in the southern part of the country.

5.   Mauritius the main island, from which the country derives its name, is of volcanic origin and is almost entirely surrounded by coral reefs; former home of the dodo, a large flightless bird related to pigeons, driven to extinction by the end of the 17th century through a combination of hunting and the introduction of predatory species. Mauritius population density is one of the highest in the world; urban cluster are found through the main island, with a greater density in and around Port Luis; population on Rodrigues Island is spread across the island with a slightly denser cluster on the north coast.

7.   Mozambique, the Zambezi River flows through the north-central and most fertile part of the country. Three large populations clusters are found along the southern coast between Maputo and Inhambane, in the central area between Beira and Chimoio along the Zambezi River, and in and around the northern cities of Nampula, Cidade de Nacala, and Pemba; the northwest and southwest are the least populated areas.

African Capitals that begin with M

1.   Malabo is the capital of Equatorial Guinea.

2.   Mamoudzou is the capital of the French overseas region and department of Mayotte, in the Indian Ocean.

3.   Maputo is the capital and most populous city of Mozambique.

4.   Maseru is the capital and largest city of Lesotho.

5.   Mbabane is the capital and largest city in Swaziland (renamed the country eSwatini in April 2018).

6.   Mogadishu known locally as Xamar or Hamar is the capital and most populous city of Somalia.

7.   Monrovia is the capital city of the West African country of Liberia.

8.   Moroni is the largest city, federal capital, and seat of the government of the Union of the Comoros.