When it comes to quick and satisfying slow cooker crockpot meals South African Apricot Beef Curry recipe is at the top of the African food dinner recipe list.

Use your slow cooker for this simple South African Apricot Beef Curry recipe, it is full of apricot jam, spices and tender beef to serve with rice and grilled bread. 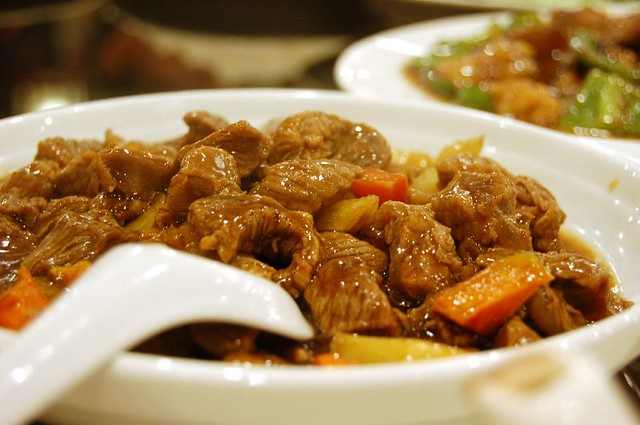 South Africa food is one of the most diverse on the African continent. South African apricot beef curry is an easy delicious slow cooker dinner recipe to make on a weeknight.

Black South African Foods
One of the main traditional foods of black South Africans in a recipe called pap. Pap is dry corn that's been ground to a fine powder, for breakfast, most people will cook pap into a cereal porridge that is very stiff adding milk and sugar to start their day off.

For lunch and for dinner tap if eaten alongside beans and a spicy vegetable relish named Chakalaka. South African Chakalaka uses various ingredients but the mainstays are spiciness, onions, tomatoes and often beans.

You can add of any kind vegetables you picked up at the market to the mix and in South African black townships, it would still be recognized as Chakalaka.

Colored Mixed-Race Ancestry South African Foods
In South Africa, the United East India Company, colonized portions of Southeast Asia, mainly Malaysia and Indonesia and practiced slavery in the South African Cape. Those people that opposed the colonization and occupation of their lands by the Dutch in Asia were taken as political prisoners or shipped to exile at the Cape of Good Hope as slaves.

The formerly imprisoned people today are known as Cape Malay. In 1867, Cape Town was divided into six districts and Kanaladorp became the sixth district. The first to be forced out of District Six were black South Africans. On February 11, 1966, District Six was declared a white area under the Group Areas Act of 1950, and by 1982, the life of the community was over. More than 60,000 people were forcibly removed and their houses flattened by bulldozers.

Currently, Bo-Kaap South Africa is a tourist destination best known for its 2-3 blocks brightly colored homes and cobblestoned streets. Popular among Malay people are Halaal food dishes such as chicken curry. Stews, roasts and baked vegetables form part of the Malay diet and the food is very spicy.

Just as with white South Africans coloreds are famous for stews made with of course meat; lamb and beef mixed in with tomatoes and cabbage and other local vegetables. Hoender Tamatie Bredie is Afrikaans South African Chicken Tomato Stew recipe made with onions, tomatoes, apricot jam, and many spices. Samosa recipe of Africa is a deep-fried favorite African street food filled with potatoes and African spices. Samosas are usually eaten as street food meal on the go in Africa.
South African Indian Foods
Traditionally South African Indian recipes call for garam masala, a blend of seven spices, cumin, coriander, cardamom, black pepper, cinnamon, cloves, and nutmeg. Garam masala is a strong spice mixture and is the heart of most African Indian dishes.

White South African Foods
White South African food consists mainly of meat and homebrewed spirits. Frikkadel is the Afrikaans word for a meatball and ostrich is very popular meat eaten in Southern Africa as ostrich meat is very lean with very low-fat content and is healthier red meat. Ostrich meat is used in many stews called Potjiekos. Potjiekos (Pot = potjie and Food =kos) is a traditional Southern African Afrikaner stew cooked in a cast-iron pot over an open fire.

Philippolis is the oldest settlement in the Free State province of South Africa and is quiet most of the year. However, in April it’s time to celebrate a local tradition of distilling Afrikaans "white lightning" at the Philippolis Witblits Festival.

Distinctive family recipes and small-batch manufacturing of Witblits means there is great variety in the manufacturing of white dog. In most homemade brews, a “still” is used to create the product. Fire heats up the brew mixture in the tank, the steam rises through the copper head before the liquid slowly flows down coiled tubes dripping out of the tap, into a bucket.

In 1924 there became a monopoly on brandy production, however, small farmers were allowed to create their own homebrew usually from the leftover fruit on farms. Some museums in South Africa have a special liquor license to distill Witblits as a working exhibit to collect money for the museum.

Biltong is a traditional snack from Southern Africa made of dried meat. Biltong is an Afrikaans word meaning narrow strip of dried meat, the word originates from Dutch with “bil” meaning buttock and “tong” meaning tongue or strip. Many different types of meat are used to produce biltong, which comes shredded, ground, sliced, in sticks and made into slabs. Biltong is marinated, seasoned and air-dried.

Meat is king in South Africa due to a large cattle industry. Chisa nyama or Shisa Nyama is a term used in many South African townships to describe a barbecue or braai. Braai is popular in Southern Africa especially with people who live in South Africa.

Braai may have originated with the South African Afrikaner people, but has since been adopted by South Africans of many ethnic backgrounds. An important distinction between a braai and a barbecue is that it is uncommon for a braai to use gas rather than an open flame.

There is even a national braai day celebrated on September 24 every year. Braai day is considered a family food-sharing day similar to Thanksgiving in America.