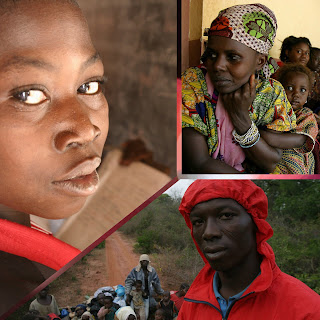 2. The former French colony of Ubangi-Shari became the Central African Republic upon independence in 1960.

3. The Central African Republic is also sometimes referred to as C.A.R.

6. Most of the country is savanna plateau, with rain forests in the south.

7. The Central African Republic is also well known for Harmattan winds. The Harmattan wind is strongest from November to March and is a very dry and very dusty trade wind that blows from the Atlantic Ocean across Africa.

8. CAR has no coastline and is a landlocked country almost in the precise center of Africa.

10. CAR has one body of water, the Ubangi River, which eventually flows into the large Congo River.

18. Since gaining independence from France in 1960, four of its five presidents have been overthrown through hostile coups.

19. Despite natural resources, including gold, timber, diamonds and uranium, the Central African Republic is among the poorest nations in the world.

20. CAR is a possible hideout of Joseph Kony, the brutal leader of the Lord Resistance Army.

21. Michel Am-Nondokro Djotodia was the first Muslim to hold the office of President in the mainly Christian country of The Central African Republic.

23. The three most popular parks are Manovo-Gounda St Floris, known for its high concentration of hippos; Bamingui-Bangoran in the north; and Dzanga-Sangha in the southwest.

24. The Falls of Boali are a popular tourist destination.

25. Football (soccer), Basketball and Rugby the most popular sports.

26. Central African Republic athletes have participated in the Olympic Games since 1968.