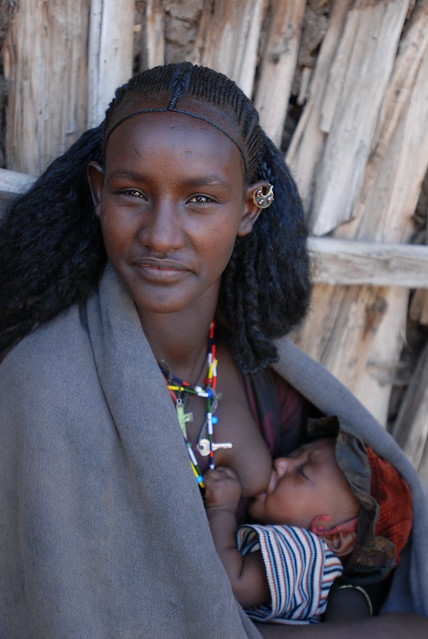 Breasts are less sexualized in most African traditional societies where women go topless. In most other societies breasts are exploited in advertising and in pornography.

The Sexualisation of Breasts

Female breasts wield amazing power in some societies. Curvy women have leveraged the power of their breasts to manipulate even the most able, self-controlled. Empires have fallen, wills revised, millions of magazines and bras sold, and Super Bowl audiences scandalized.

According to the National Geographic Society’s official website, one of the magazine’s early milestones came when its publishers decided that from then on out, they would show native peoples as they were, including when photographed nude.

In the case of November 1896, that month’s issue included a photograph of a topless Zulu bride and groom from South Africa.  The message conveyed is that nudity is not necessarily “pornographic” in nature, but that it has a legitimate, academic place when studying world cultures. One problem is other cultures see bare breasted African women as lacking modesty, that they are closer to animals, that they are loose and want sex all the time.

However, in the 18th and 19th centuries, at the same time National Geographic displayed bare breasted African women for scientific cultural purposes, in the Victorian age there were and still are taboos and social stigmas against showing nakedness, including showing your ankles or wearing pants. The images of bare chested African women were disgraceful to say the least and African women were seen as heathens and not real people.

No breach of etiquette elucidates the point more than the Victorian taboo about female toplessness. A taboo persists to the present day. In Africa, women were not taught to be ashamed of their bodies, ashamed of being naked. The African culture understood, even from ancient times, breastfeeding is the best way to feed baby and breasts are for nourishing life, not giving pleasure.

One example of the African culture understanding the natural importance of breasts is the Temple of Horus at Edfu built between 237 BC and 57 BC. The Temple of Edfu is an ancient Egyptian temple, located on the west bank of the Nile in Edfu, Upper Egypt. Carved on the Edfu Temple walls is Isis breast-feeding young Horus. The child Horus is depicted in the form of naked boy with his hand held up against his mouth or huddle up on his mother Isis' lap who is breastfeeding him.

Many boys will start to develop breasts in their teenage years. This can be quite alarming for them, but it is perfectly normal and the breast tissue will disappear later on. Breast growth in boys - usually around the ages of 12-14 - is caused by a lag in the production of testosterone. Background levels of female hormones may cause the breast to grow. As soon as testosterone levels increase, they will swamp the female hormone and the breast growth will disappear. Up to a third of boys experience some breast development on one or both sides. This causes great worry and embarrassment for the affected boy.