The Man Who Knew Everything African Folklore Story 


Can one person know everything? In the African Folklore story of The Man Who Knew Everything, Nyeri learns a valuable lesson to listen first and then speak.

Nyeri is a visitor in the village over which rules his friend King Mwangi. 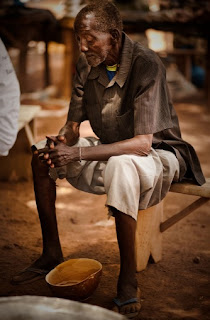 Soon Nyeri begins to find fault with things in his friends’ village: the rice-crop is not planted right, the fish-traps are made wrong, and the roofs of the huts are not strong.

One day King Mwangi has a big gathering to talk with the elders of the village.


Nyeri also finds fault in what the King says at every turn.


King Mwangi says to Nyeri, "My friend, when a stranger comes to a town and the people are dancing, he should learn the step before joining in, otherwise he will spoil the dance."

Land is Not For Women in Sierra Leone