Transfer to The Hague July 3, 2008. The trial began on November 22, 2010. The International Criminal Court (ICC) on June 21, 2016, sentenced former Congolese vice-president, 58-year-old Jean-Pierre Bemba Gombo to 18 years in prison and he was criminally responsible pursuant to Article 28(a) of the ICC Rome Statute for the crimes against humanity.

The crimes were murder, rape, and the war crimes of murder, rape and pillaging committed by the MLC troops in the Central African Republic from on or about October 26, 2002, to March 15, 2003.

His arrest warrant was issued on June 10, 2008. As a military commander, he was held responsible for two counts of crimes against humanity, murder and rape, and three counts of war crimes, murder, and rape and pillaging. Jean-Pierre Bemba Gombo was the President and Commander-in-Chief of the Mouvement de Libération du Congo (MLC). He effectively acted as a military commander and had effective authority and control over the MLC troops.

The attack against the civilian population, in particular, in Bangui, Boy-Rabé, Point Kilomètre, Point Kilomètre 22 and Mongoumba, was carried out on a large scale and targeted a significant number of civilian victims. It was alleged he knew that MLC troops were committing crimes and did not take all necessary and reasonable measures within his power to prevent or repress their commission.

Trial Chamber III Presiding Judge Sylvia Steiner read a summary of the decision. Ms. Steiner indicated that the Chamber found the crimes of murder, rape, and pillaging to be of serious gravity. Also, two aggravating circumstances applied to the crime of rape: it was committed against particularly defenseless victims, and with particular cruelty. The crime of pillaging, which the majority of the Chamber considered to be the particular cruelty with which the crime was committed.

The sentences imposed would run concurrently. The entire time Mr. Bemba has spent in detention in accordance with an order of the ICC, since 24 May 2008, will be deducted from his sentence. The ICC Trial Chamber III is composed of Ms. Steiner of Brazil, Judge Joyce Aluoch of Kenya and Judge Kuniko Ozaki of Japan.

On June 8, 2018, the Appeals Chamber of the International Criminal Court decided by majority to acquit Jean-Pierre Bemba Gombo from the charges of war crimes and crimes against humanity. Appeals Chamber found errors that affected the decision of Trial Chamber III convicting Bemba Gombo. The Chamber considered it was appropriate to reverse his conviction and enter an acquittal.

The Appeals Chamber concluded, by a majority, that Trial Chamber III had erroneously convicted Bemba Gombo for specific criminal acts that were outside the scope of the case and that the proceedings in relation to these acts must be discontinued.

The Appeals Chamber also found that Bemba Gombo cannot be held criminally liable under Article 28 of the ICC Rome Statute for the remaining crimes committed by MLC troops during the Central African Republic operation and that he must be acquitted thereof because the Trial Chamber had made serious errors in its finding that Bemba Gombo had failed to take all necessary and reasonable measures to prevent or repress the crimes of the MLC troops.

On September 17, 2018, Trial Chamber VII sentenced Bemba Gombo to one-year imprisonment and fined him $337,215.00 or EUR 300,000 for offenses against the administration of justice. The time spent in detention was deducted and, accordingly, the sentence of imprisonment is considered as served.

Injustice, war crimes, crime, and punishment are a few of the massive human rights issues affecting billions of people around the world. When governments, companies and private industries are able to make a profit off crime, is justice actually blind? 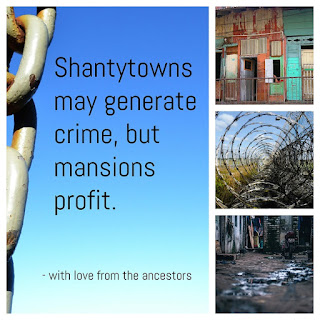 Poverty is the companion of injustice.

Crime eats its own children.

A wise man can see more from the bottom of a well than a fool can from a mountaintop.

The greatest crime in a desert is to find water and keep silent about it.

Death is nothing and pain is nothing, but cowardice is crime and disgrace, the greatest punishment.

Corn can't expect justice from a court composed of chickens.

The International Court of Justice, which has its seat in The Hague, is the principal judicial organ of the United Nations. The Hague is a city on the western coast of the Netherlands and the capital of the province of South Holland.