Africa's Coffee, Cocoa, and Cotton rule the New York Stock Exchange Intercontinental Exchange Group soft commodities market. African influences are extensive in the softs markets and are of vital importance to the international soft commodity trading of the world.

Africa's Influence On The New York Stock Exchange and China

A stock exchange is a facility where stockbrokers and traders can buy and sell securities, such as shares of stock and bonds and other financial instruments. The New York Stock Exchange (NYSE) is the world's largest stock exchange by market capitalization.

African influences are extensive in the soft markets especially in the case of cotton, cocoa, and coffee and are of vital importance to the international soft commodity trade on the Atlanta-based Intercontinental Exchange Group or ICE of the New York Stock Exchange, NYSE.

According to ICE, it became the center of global trading in soft commodities with its acquisition of the New York Board of Trade in 2007. Now known as ICE Futures U.S., the exchange offers futures and options on futures on soft commodities including coffee, cocoa, sugar, cotton, and frozen concentrated orange juice.


What is a soft commodity? The definition of a soft commodity is a resource that is grown rather than mined such as coffee, cocoa, sugar, maize or corn, cotton, and tea.

What are futures? Futures are contracts that require traders to buy or sell assets at a set price at a set date in the future allowing farmers and other food producers to lock in the prices they would get for crops even before harvest time.

China as a foreign investor in Africa

China is the largest developing country foreign investor in Africa. Significant Chinese investment and development finance have been channeled into infrastructure. Trade with China is growing much faster than that with the United States and the European Union.

There are 16 major exchanges in Africa, 30 in total.


China is only one of several major emerging economies with an interest in Africa, the others being Brazil, India, The Republic of Korea, the Russian Federation, and Turkey.

Africa received nearly half of the cumulative $54 billion provided by China in global foreign aid through 2012 significantly more than any other region. Chinese development assistance is frequently packaged into agreements that mix grants and investment, and concessional and non-concessional loans.

Investments in infrastructure and mining are likely to slow, given the recent decreases in global commodity prices, Chinese investment should continue to add to the domestic demand for goods and services in Africa. 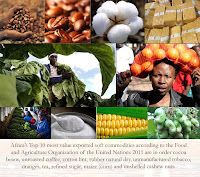