The former Chairperson of the African Union Commission is Her Excellency Dr. Nkosazana Dlamini Zuma. 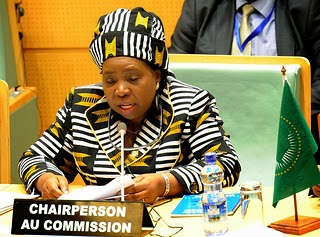 On September 9, 1999, 54 African countries, in their quest for unity, economic and social development called for the establishment of an African Union. The vision of the African Union is that of “An integrated, prosperous and peaceful Africa, driven by its own citizens and representing a dynamic force in global arena.” The African Union's vision is also to spearhead Africa’s development and integration in the global arena.

Her Excellency Dr. Nkosazana Clarice Dlamini Zuma embodies empowerment of women across the African continent and the world. She was born on January 27, 1949 in the current South African province of KwaZulu-Natal.

While in exile, she received her doctorate from the University of Bristol in the United Kingdom in 1978. She became an active underground member of the African National Congress (ANC) from 1971-1976 and a member of the South African Students Organization being elected deputy president.

After the 1994 elections, Dr Dlamini Zuma was appointed as Minister of Health in the cabinet of the late President Nelson Mandela. In July 2012, the African Heads of States elected H.E Dr. Dlamini Zuma Chairperson of the African Union Commission. She is the first woman to lead the continental organization, including its predecessor, the Organization of African Unity. H.E Dr Dlamini Zuma was the first woman and candidate of the southern region elected to the post.

A few objectives of the African Union are to achieve greater unity and solidarity between the African countries and the peoples of Africa, promote peace, security, and stability on the continent and advance the development of the continent by promoting research in all fields, in particular in science and technology. Recently African leaders have agreed to send 7,500 troops to fight the Boko Haram insurgency in northeast Nigeria. There are 54 African Union Member States as of March 2015.﻿﻿﻿﻿

Dr. Dlamini Zuma stated during an interview "As a young girl growing up in Polela, in rural KwaZulu-Natal, South Africa, I became acutely aware of the close links that exist between health and development. This occurred partly through the work of Dr Sidney and Emily Kark and John Cassel."