Argan oil is used for cooking, making beauty products, and medicines throughout Africa's Morocco and the world. 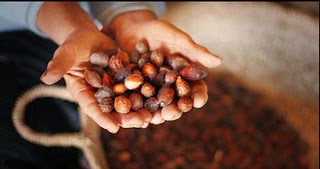 The multipurpose argan tree is a very common tree native to southwestern Morocco. The trunk and branches of the tree are used for firewood, the leaves used to create medicine but the almond-sized fruits are the star of the show. The tree is prized for its fruits that contain kernels which are processed for their much-beloved oil. 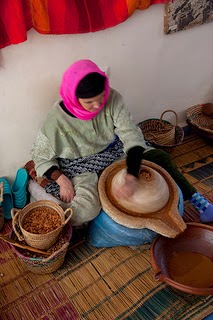 Argan oil is used much like olive oil, for cooking, beauty products, and medicines. Argan oil extraction is a difficult, time-consuming, and labor-intensive process. Berber women manually harvest the fruit between June and August, which are the hottest season in Morocco. Once the fruit is gathered it is left in the sun to dry for a few weeks. The Argan fruit covering dries out turning a brownish coffee color and the covering is now easy to remove extracting the prized oval shape seed.

﻿Argania spinosa is the scientific name for the evergreen argan tree grown for its almond-shaped fruits that contain the highly esteemed seeds which contain the valued argan oil. In the past argan fruits were fed to goats, the nut recovered from the animal dung and the oil extracted from the seeds. However, presently in many areas, the argan fruit is gathered manually and the oil from the nut extracted by hand machines. 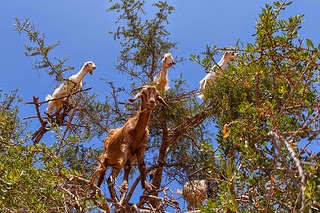