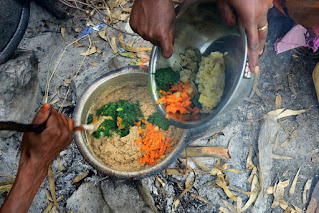 Ugali is a dish made of various types of flours cooked in boiling liquid into a soft dough. Ugali is the most common staple starch in the recipes of the African Great Lakes region and Southern Africa.

In the African Great Lakes region and many parts of East Africa, sukuma wiki or collard greens is a common dish. The word for word translation of the phrase sukuma wiki is to push the week since it is a vegetable that is affordable.

Sukuma wiki is usually eaten together with Ugali for dinner in the African Great Lakes region and many parts of East Africa.

Directions
Heat water to boiling in a saucepan. Slowly pour the cornflour into boiling water. Avoid forming lumps. Stir continuously and mash any lumps that do form. Add more cornflour until it is thick as soft bread dough. Serve immediately with sukuma wiki collard greens, stew, or any dish you would use a spoon with to soak up the sauce, ugali is bland tasting on its own.

Sukuma Wiki means to stretch the week and Ugali is a rather low-priced dish, therefore, Ugali and Sukuma Wiki is an inexpensive meal you would cook when you are between paychecks.