Heqet usually depicted with a frogs head holding an ankh is the Egyptian goddess of childbirth.

Heqet, pronounced Hey-ket is an Egyptian goddess associated with labor and childbirth in Ancient Egypt. She is depicted as a frog, or a woman with the head of a frog. Heqet servants were priestesses who were trained as midwives; a priestess is a woman who to performs the sacred rites of a religion, in this case childbirth delivery, and care after the birth of the mother and child.
Frogs signify transformation, change, cleansing through water, fertility, and prosperity. The ancient Egyptians saw thousands of frogs appear all along the Nile at certain times of the year. This appearance of frogs came to symbolize fruitfulness and coming life.
Ancient Egypt’s climate was cooler and wetter. The appearance of frogs along the fertile banks of the Nile River, seasonally flooded agricultural land and canals and ditches were probably toads, the Damietta toad to be exact which s a small species of greenish grey Nile Delta toads.
Traditional midwives have been an integral part of African medicine for centuries. First-born sons are particularly desired in the Egyptian culture and Heqet assisted in bringing the three sons of the Sun-god Rā into the world, Khafra, Menkaura, and Userkaf. Ancient Egyptian midwives were trained professionals to help ensure the survival of mother and child during labor, delivery, and after the birth.
Midwifery skills of Heqet played an instrumental role to line of Pharaohs in Ancient Egypt's Old Kingdom assisting with the birth of Ra, the sun god's three sons;. Khafra Egyptian pharaoh king of the 4th Dynasty 2,500 BCE, Menkaura, the son of Khafra also an Egyptian pharaoh king of the 4th Dynasty and Userkaf Egyptian pharaoh king of the 5th Dynasty of ancient Egypt 2,325 years BCE. 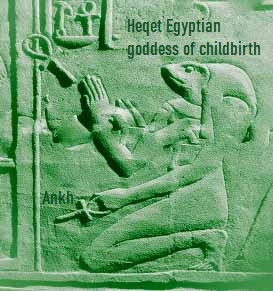 A pharaoh was considered the divine intermediary between the gods and the Egyptian people, the role of Heqet, the Egyptian goddess of childbirth was an integral part of Egyptian childbirth rituals. Being responsible for assisting giving birth to the sons of Ra, Heqet, with child mortality rates high in Ancient Egypt, needed to minimize the feeling of distress caused before and by childbirth, have keen physical, mental and spiritual child and maternal knowledge, a specialized medicinal knowledge of plants and herbs as well as surgical techniques, and a personal connection to the spirit world.
The pharaoh was considered a god on earth, kings and religious leaders of ancient Egypt. Ra, portrayed as a falcon and known as the sun god is one of the most important gods in ancient Egyptian religion responsible for the existence of all creation
Heqet the Egyptian goddess of childbirth is usually seen holding the ankh or key of life, an ancient Egyptian symbol. The ankh looks like a cross with a teardrop-shaped loop at the top. According to ancient Egyptians goddess beliefs Heqet literally helped to give birth to gods as she held the key of life in her hands. The use of religious beliefs and rituals was a powerful context to enrich the spirituality of ancient Egyptian culture.