Folklore story of Koelle who has two wives, one wife brought him honey and the other wife was selfish is the traditional beliefs and story of a home where honey caused the death of a wife. 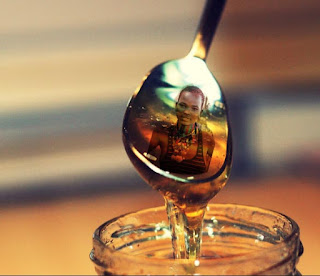 Dying Over Honey African Folklore.
Koelle had two wives. One day both went to fetch firewood together.

The younger discovered some honey.

The wives harvested the honey and when they had finished, both sat down and ate heartily.

The older wife paused eating the honey after a while and set some aside.

When they both were done eating, they went to finish collecting their firewood. When they rose up, the younger wife saw the elder one had some honey in her hand; she said, "Why did you not ask my permission to eat and set aside?

"The elder said," You have given birth to no children, and have only a husband to take care of, and you ask why I did not seek your permission? You should have remembered your husband. As for me, I am saving honey for my husband."

The younger wife looked hard at the older wife but did not say a word, and went on collecting and bundling up the firewood.

The elder wife stored the honey in large leaves and also collected and bundled up her firewood.

Both wives started for home.

On reaching home, the elder went to her house and the younger to hers. The elder went indoors, and found the husband there and gave him the honey. He ate and said, "Thank you my thoughtful wife." He went on eating until he had finished eating all of the honey.

He immediately went out and ran quickly to the house of the younger wife. He was full of hope, saying in his heart, “Since this woman brought me honey, she will have brought much more; for she knows I love her best.”

He went in and sat down. He remained sitting a long time; but his second wife did not bring forth any honey.

At length he asked, "Where is the honey?

"She answered, "I have not brought any.

He was hurt that the wife he loved best did not think to bring him any honey and said “You thoughtless, selfish woman! He stood up and pushed her hard against the fireplace where she stuck her head on a stone and died.

He buried her with her favorite necklace made of beads and feathers thinking this kind act would satisfy the earth gods and forgive him for the life he took.

When he had buried her, a few feathers fell from her necklace and turned into a bird.

The bird flew around the village saying, “I am the wife of Koelle, I have not run away, I was killed by his hands when he was asking me about the honey. “

The husband was perplexed how this little bird knew the truth of his evil deed saying, “What can I do to the bird? It constantly annoys me and is telling the entire village what I did!" He thought in his heart, and said, “I will kill it now and put it in my bag." He threw at it and killed it, and put it in his bag, and fastened it firmly with the string, and went on his way.

At length he reached his second wife's village. When he arrived, they were dancing.

He was tired, wanted to rest awhile before joining in on the dance, and untied his bag.

He had forgotten the bird, which he had placed in it. As soon as he untied it, the bird came out, flew around the village saying, “I am the wife of Koelle, I have not run away, I was killed by his hands when he was asking me about the honey. “

The dancing stopped and asked Koelle, "What does the bird say?”

He nervously replied, "I do not know, the bird lies! Besides she was a selfish wife who did not bring me honey!"

They killed Koelle for he admitted the bird spoke the truth.