Libya has the highest obesity rates in Africa while Ethiopia has the lowest. List of countries and percent of adults aged 18 and over considered obese.

Here is a list of countries and percent of adults aged 18 and over considered obese in Africa. The five most obese African countries are Libya, Egypt, South Africa, Algeria and Tunisia.

Obesity is defined as an adult having a Body Mass Index greater to or equal to 30. Most of the world's population lives in countries where overweight and obesity kills more people than underweight, this includes Africa despite the media perception of starving Africans.

Throughout Africa as part of the trend toward greater consumption of convenience foods, demand for fried potatoes is increasing. Over-consumption of these high-energy products, along with reduced physical activity, can lead to overweight. Therefore the role of fried foods in the African diet must be taken into consideration in efforts to prevent overweight, obese and diet related non-communicable diseases, including heart disease and diabetes.

Obesity is a complicated but preventable health topic resulting from a combination of causes and individual factors such as behavior and genetics. Once considered a first world problem, obesity is on the rise in low- and middle-income countries in urban African communities.

In urban African populations out of the 20 fastest rising countries with obesity, nearly half are in Africa. Contributing factors include the prevalence of fast food restaurants such as McDonald's and KFC and food marketing and promotion. Libya has the highest obesity rates in Africa while Ethiopia has the lowest. 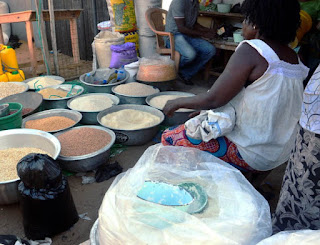 Obesity is frequently subdivided into categories:

Class 3: BMI of 40 or higher, class 3 obesity is sometimes categorized as extreme or severe obesity.

Percent of fat people in Africa listed by country.