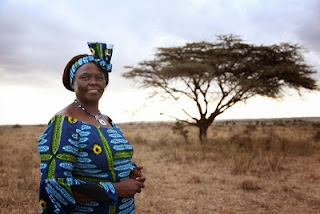 She became the first African woman to receive the Nobel Peace Prize in 2004 and the first woman in East and Central Africa to earn a doctorate degree. She earned her doctorate from the University of Nairobi in 1971.

Dr. Maathai was a Kenyan environmental activist who founded the Green Belt Movement (GBM). In 1976, while she was serving in the National Council of Women, Professor Maathai introduced the idea of community-based tree planting. The GBM, main focus at the time was poverty reduction and environmental conservation through tree planting.

According to The Green Belt Movement, "Dr. Maathai saw the urgent need to respond to the necessities of rural Kenyan women who reported that their streams were drying up, their food supply was less secure, and they had to walk further and further to get firewood for fuel and fencing.

The Green Belt Movement encouraged the women to work together to grow seedlings and plant trees to bind the soil, store rainwater, provide food and firewood, and receive a small monetary token for their work.

Shortly after beginning The Green Belt Movement work, Dr. Maathai saw that behind the everyday hardships of the poor and environmental degradation, deforestation, and food insecurity there were deeper issues of disempowerment, disenfranchisement, and a loss of the traditional values that had previously enabled communities to protect their environment." Dr Maathai organized women to work together for a mutual benefit, and to plan for future generations.

According to the Nobel Prize, “Maathai's mobilization of African women was not limited in its vision to work for sustainable development; she saw tree-planting in a broader perspective which included democracy, women's rights, and international solidarity.

In the words of the Nobel Committee: "She thinks globally and acts locally." Dr. Maathai died on September 25, 2011, at the age of 71 after a battle with ovarian cancer.

Below is a portion of Dr. Maathai Rise Up and Walk! speech at the Third Annual Nelson Mandela Lecture in Johannesburg, South Africa July 19, 2005.

“What can be done to prepare Africa so that she benefits from the concessions and opportunities that surely lie ahead...

Often, those in power invent excuses to justify the exclusion and other injustices against those perceived to be weak and vulnerable. But when resources are scarce, so degraded that they can no longer sustain livelihoods, or when they are not equitably distributed, conflicts will invariably ensue.

Equitable distribution of resources cannot be effected unless there is democratic space, which respects the rule of law and human rights. Such democratic space gives citizens an enabling environment to be creative and productive.
What is clear is that there is a close linkage between sustainable management of resources and equitable distribution of the same on the one hand and democratic governance and peace on the other.

These are the pillars of any stable and secure state. Such a state has an enabling environment for development. People who are denied the three pillars eventually become angry and frustrated, and undermine peace and security in their neighborhoods and beyond.


Links to more valuable information
Read more about women on the African continent.