Dukkah, or Dukkha is an Egyptian spice mix of countless variations of herbs, toasted nuts and spices sprinkled over eggs, meat, poultry, pasta, rice or vegetables. You can use Dukkah as a rub for grilled ostrich, steak, chicken or fish.

Dukkha Egyptian spice mix of countless variations of herbs, toasted nuts and spices as a rub for grilled ostrich, steak, chicken or fish. 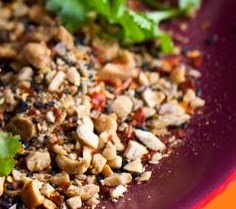 Directions:
Mix all ingredients well in an airtight container and store in a dry place.


Occupying the northeast corner of the African continent, Egypt is filled with a deep history of Africa. Egypt has a desert climate with hot, dry summers and moderate winters. It is located in Northern Africa, bordering the Mediterranean Sea, between Libya and the Gaza Strip, and the Red Sea north of Sudan, and includes the Asian Sinai Peninsula. The English name Egypt derives from the ancient Greek name for the country Aigyptos, the Arabic name Misr can be traced to the ancient Akkadian misru meaning border or frontier.

About the population and people of Egypt


Most of the country is desert, so about 95% of the population is concentrated in a narrow strip of fertile land along the Nile River, which represents only about 5% of Egypt’s land area. Egypt is the most populous country in the Arab world and the third most populous country in Africa, behind Nigeria and Ethiopia. Around 42 percent of Egyptians are urbanites while 58 percent are rural dwellers.