A wise father encourages breastfeeding so his baby grows up to be strong, healthy, and intelligent.

In Africa, the vast majority of babies are breastfed.

Breasts in Africa; breasts are less eroticized. Breasts are for feeding infants but there is a counterproductive dogged issue as female breasts exposed for money.

According to the National Geographic Society’s official website, one of the magazine’s early milestones came when its publishers decided that from then on out, they would show native peoples as they were, including when photographed nude. In the case of November 1896, that month’s issue included a photograph of a topless Zulu bride and groom from South Africa.

The message conveyed is that nudity is not necessarily pornographic in nature, but that it has a legitimate, academic place when studying world cultures. The African culture knew breastfeeding is the best way to feed baby and breasts are for nourishing life, not giving pleasure. 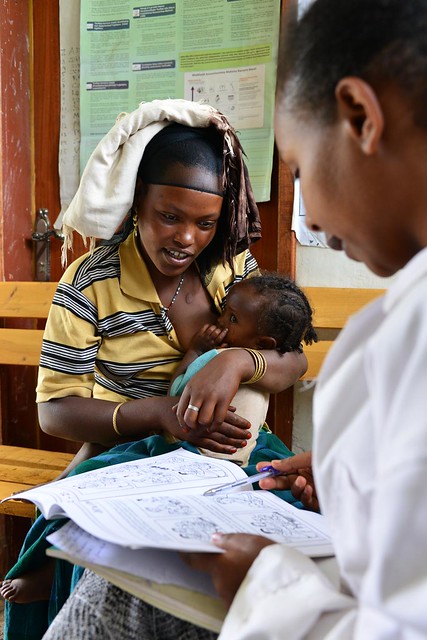 Above: Health extension worker Elsebeth Aklilu refers to a family health card while counseling Kedo Abdula, who is holding her 21-month-old daughter, Fenete Abdela, on best nutrition practices, at the health post in the village of Maderia, in Gemechis, a woreda (district) of Oromia Region.

One problem is other cultures see bare-breasted African women as lacking modesty, that they are closer to animals, that they are loose and want sex all the time. However, in the 18th and 19th centuries, at the same time, National Geographic displayed bare-breasted African women for scientific cultural purposes, in the Victorian age, there were and still, are taboos and social stigmas against showing nakedness, including showing your ankles or wearing pants.

The images of bare-chested African women were disgraceful, to say the least, and African women were seen as heathens and not real people. No breach of etiquette elucidates the point more than the Victorian taboo about female toplessness. A taboo persists to the present day.

In Africa, women were not taught to be ashamed of their bodies, ashamed of being naked. The African culture knew breastfeeding is the best way to feed baby and breasts are for nourishing life, not giving pleasure. Giving no other foods or liquids, including water, to babies for the first six months could save the lives of up to 1.3 million children each year worldwide.

Early initiation of breastfeeding provides warmth, promotes bonding, and helps the mother by reducing the risk of postpartum hemorrhage. During the first days of life, breastfeeding helps to prevent low blood sugar and low body temperature, which is important contributors to newborn deaths.

Most newborns are ready to find the nipple and latch on to the breast within the first hour of birth, if provided with immediate skin-to-skin contact. Colostrum, the thick and yellowish or clear breastmilk produced in the first few days provides the baby with high levels of antibodies, immune cells, vitamin A, and other protective factors.

Breast is best recommended breastfeeding practices for the newborn:

• Early breastfeeding – initiation of breastfeeding takes place within one hour of birth, with colostrum and continuous skin-to-skin contact.

• Exclusive breastfeeding (no other foods or liquids, not even water) for six months.

• Good attachment and positioning and prompt treatment of breast conditions such as engorgement, cracked nipples, mastitis, and breast abscesses.

• Frequent breastfeeds, day and night (8-12 times per 24 hours and more frequently if needed, especially in the early weeks).

• Continuation of breastfeeding when the mother or the newborn is ill.

• Extra support for feeding more vulnerable newborns, including low birthweight or premature babies, those born to HIV-infected women, sick or severely malnourished babies, and those in emergency settings such as war or natural disaster.

A wise father encourages breastfeeding so his baby grows up to be strong, healthy, and intelligent.

Did you know? The average woman's breasts have increased from a 34B in the 1960s to 36DD today.