Africa is bracing for another outbreak of the deadly Ebola-virus. The Ebola-vaccine developed in record time has proved highly effective against the deadly virus in a large trial in Guinea where 12k died. 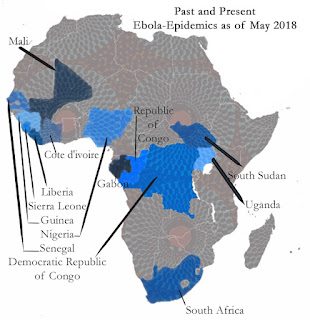 On May 8, 2018, the Ministry of Health of The Democratic Republic of the Congo declared an outbreak of Ebola-virus in Bikoro Health Zone, Equateur Province. This is the ninth outbreak of Ebola-virus over the last four decades in the country. As of May 16, 2017, 45 Ebola cases were reported including 25 deaths, a fatality rate of 56 percent.

The Ebola outbreaks in Nigeria and Senegal were declared officially over in October 2014. Sierra Leone was declared free of Ebola on November 7, 2015, Guinea followed in December 2015. Liberia has been the worst hit, with more than 4,800 dead and 10,672 Ebola-infected.

During the peak of Ebola-transmission during August and September 2014, Liberia was reporting between 300 and 400 new Ebola-cases every week. The Ebola-epidemic seemed to subside so the outbreak in Liberia was declared over on May 9, 2015, only to resurface seven weeks later when a 17-year-old died from the Ebola-disease. There needs to be 42 days without any new cases for a country to be declared Ebola-free.

The Ebola-vaccine developed in record time has proved highly effective against the deadly virus in a large trial in Guinea where more than 11,500 people died from Ebola since the epidemic began in December 2013. The first person to receive the trial vaccine in Guinea was Mohamed Soumah, 27.

He tells The World Health Organization "It wasn't easy. People in the village said that the injection was to kill me. I was afraid. I was the first one to be injected, the very first, here in my village on March 23, 2015. I've been monitored for 3 months and I've had no problems. The last follow-up, 84 days after the vaccination, was all clear."

As of May 2018, there are currently 4,300 doses of Merck’s V920 vaccine in Geneva, held by the WHO, the company told STAT in an email. Merck has given its permission for that stock to be used in DRC. “Merck also is collaborating with the World Health Organization to provide additional doses beyond those needed to support the current response,” Merck stated.  Merck has a stockpile of more than 300,000 additional doses in the United States.

Using the Ebola-vaccine where it is needed will take precise planning because the vaccine must be kept at sub-zero temperatures from minus 76 to minus 112 degrees Fahrenheit in a rural remote tropical African region where electricity is virtually nonexistent. 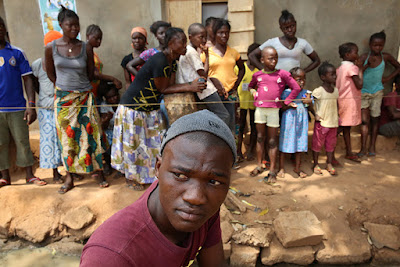 Past and present Ebola-epidemics African Countries

Ebola first appeared in June and July in 1976 in simultaneous outbreaks in Nzara, South Sudan, and Yambuku, the Democratic Republic of the Congo located in Central Africa

The time from infection with the virus to onset of symptoms is 2 to 21 days.