About the African Turkana People of Africa


The Turkana people live on the Ilemi Triangle, a disputed land bordering South Sudan, Kenya and Ethiopia. Turkana People live in one of the most hostile places on Earth, where daytime temperatures reach 113 degrees Fahrenheit 45 degrees Celsius. 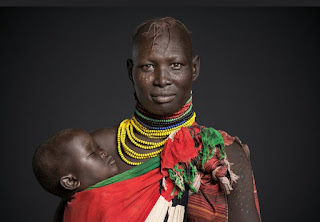 Turkana People in the Ilemi Triangle


The Turkana tribe originally came from the Karamojong region of northeastern Uganda. Turkana oral traditions purport that they arrived in Kenya while pursuing an unruly bull. The land they occupy is harsh and very dry. The Turkanas were, therefore, less affected by colonialism than other tribes because the British saw little value in their land.

Turkana tribe is part of the Nilotic tribes and constitutes the second largest pastoralist community in Kenya after the Maasai. The Turkana maintain their traditional way of life. They are notable as being very adaptable, living in harsh and inhospitable terrain in the Ilemi Triangle.

The Ilemi Triangle, at up to 5,405 square miles in area is larger than some African countries, and is at the point where the frontiers of Ethiopia, Kenya, and the Sudan meet. Its present economic value is as a seasonal grazing area to which five ethnic communities, the Turkana, Didinga, Toposa, Inyangatom and Merille can lay claim.

The Turkana men dye their hair with special colored soil, while the women adorn themselves with traditional jewelry and beaded necklaces. A woman's social status or class determines the quantity and style of jewelry she wears. From the point of view of a Turkana person, one glance at a woman is enough to know her standing in the society.

Some of the most beautifully crafted items from the Turkana are the bracelets and necklaces worn by the women. Turkana artisans also produce many other artistic items, especially weapons such as spears, clubs and knives. The Turkana also manifest special skills in metalwork, woodcarving, and stone carving.

As with all other pastoralist tribes in Kenya, livestock, especially cattle, are at the core of Turkana culture. The Turkana place such a high value on cattle that they often raid other tribes to acquire more animals. This may be seen as theft, but to the Turkana and other pastoralist tribes, it is a traditional custom. Cattle raids are common between Turkanas and their neighboring tribes, especially the Karamoja of Uganda, and the Pokot and Marakwet of Southern Kenya.

The Turkana people live a nomadic life, always moving from one place to another depending on the availability of pasture and water for their animals. Cattle are the main source of livelihood for the Turkana, especially in the rural areas. The livestock provide milk and meat and are also a source of wealth when sold for money. Fishing in Lake Turkana is another important source of income for those living close to the lake.

Polygamy is an acceptable way of life. A Turkana man can marry as many wives as he can afford to pay the bride price. Like the Luo tribe and the Teso, the Turkana tribe does not practice male circumcision. They also do not hold any special initiation rituals to mark the transition to manhood.