In Africa a strawberry lake flows.

There is a natural lake the color of strawberries, Lake Retba or Le Lac Rose lies in Senegal Africa just one hour from its capital city Dakar. 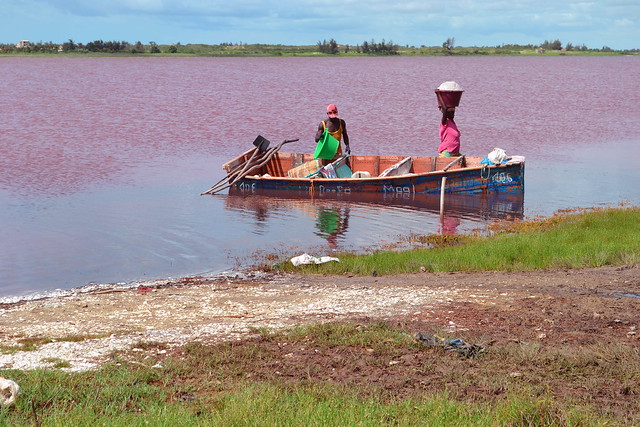 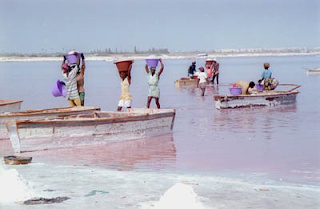 Le Lac Rose is a natural curiosity thanks to the exceptional color of its waters that daily turn from colors from African violet to ruby red.
Covering an area of approximately one sq mile, the lake breaks down into four adjacent sections labeled Khaar Yaala, Khosss, Virage and Darajee.
The color of Le Lac Rose is particularly visible during the dry season from November to June. The one sq mile strawberry lake has been a candidate for UNESCO World Heritage status since 2005. Several countries around the world have pink lakes, including Senegal, Canada, Spain, Australia and Azerbaijan.

It is estimated 1,000 people work around Le Lac Rose collecting 24,000 tons of the salt each year. Over half of the salt is exported throughout Africa.
With a maximum depth of less than ¼ mile, it contains a significant amount of salt that is labored by salt miners and exported throughout the world for cooking, leather goods, and de-icing roads. 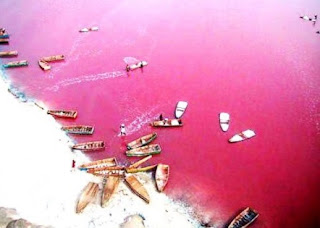 Did you know?
The coloring of Le Lac Rosewaters changes throughout the day from African violet to ruby red.

A brief look at Senegal

Named for the Senegal River that forms the northern border of the country; many theories exist for the origin of the river name; perhaps the most widely cited derives the name from Azenegue, the Portuguese appellation for the Berber Zenaga people who lived north of the river. Senegal independence came on April 4, 1960, from France however, complete independence achieved upon dissolution of federation with Mali on August 20, 1960.
Senegal’s economy is driven by mining, construction, tourism, fisheries, and agriculture, which are the primary sources of employment in rural areas.
Senegal’s flag has three equal vertical bands of green on the hoist side, yellow, and red with a small green five-pointed star centered in the yellow band; green represents Islam, progress, and hope; yellow signifies natural wealth and progress; red symbolizes sacrifice and determination; the star denotes unity and hope. Le Lac Rose natural strawberry lake of Africa Lake Retba is named for its pink waters caused by an edible, salt-loving micro-algae dunaliella salina.
African facts