15 of the Best-Loved African Proverbs

We all have that favorite quote

African proverbs can distill a lifetime into one short sentence.

I love that quote! 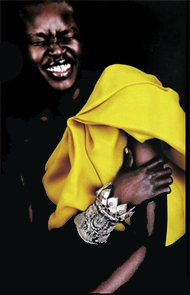 African proverbs have potent power. Need help giving voice to your current state of mind; here are 15 of the best-loved African proverbs online that know exactly what it really means to be you.


The body is easily satisfied but not the heart.

Do not abuse the hospitality of others.

Do not tell the person who is carrying you that he stinks.

Don't look where you fall, but where you slipped.

Early corn is best, so the firstborn is the one to delight in.

In the larger affairs the minor are forgotten.

It is a bad child who does not take advice.


It takes a village to raise a child.

Labor has sure reward.

Searching for something can be in the way of finding it.

The path is made by walking.

The way a man dies is determined by his occupation.

To go out often is your father and to sit in one place is your mother.