Three chief dark powerful creatures and African spiritual enemies are Impaka the cat, Incanti the chameleon and Inqolobane the snake.

The belief in spiritual enemies is common throughout the world. These ill-behaved often-dangerous spirits play tricks on humans and do things to disturb anyone who crosses their path. 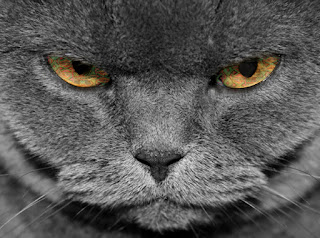 Mischievous spirits are real things to many people in Africa. They dwell in the rivers, the swamps, the forests, the desert and all places in between. They inhabit the great rifts and waterfalls. Every nook and cranny of Africa may have demons, goblins, evil mermaids and disembodied parts of humankind.
Spirits travel at night, during the day, carry mysterious lights, destroy farms, steal seeds from the town granaries, sprinkle disease and famine among the cattle and people, bewitch children in their sleep, impart gifts of divination, skill and other gratuities to whomsoever they favor, or bring sorrow, persecution, or death, any victim they will.
The belief in ill-behaved spirits are common throughout the world, a man suddenly disappears; evil spirits have devoured him. A hunter develops an unsteady aim with the gun; an evil spirit has paralyzed his expertise in shooting. A man is worsted in a bargain; his patron spirit has forsaken him. Somebody has a nightmare; it is a demon attempting to kill him.
They may meet a man in the highway and consume him without ritual. They may meet a woman at the well and bewitch her on the spot. A child playing outside may lose its soul in game played with invisible creatures and nobody be the wiser until they sicken and die.

Supernatural beings may be feathered or hoofed, two-legged animal or four-footed animal, with a tail or without a tail, in any form or with no form at all. Against these evils, a strenuous daily fight in which an elaborate assemblage of charms and fetishes must be used.

South Africa’s traditional healers believe that supernatural origins are often the chief cause of disease and have much power over the sick person. Three chief dark powerful creatures and African spiritual enemies are Impaka the cat, Incanti the chameleon and Inqolobane the snake.
ImpakaImpaka is a creature resembling a cat, which has the power of getting inside any house at will. The Impaka is bred by evil spirits and then set on its mission of finding its victim, scratching the body and injecting them with poison.
Incanti
In its natural state Incanti is a poisonous snake that is believed to have the power of changing its color or assuming various forms resembling different objects and has great powers of fascination. Anyone who comes upon an Icanti is suddenly under a trance and becomes motionless and speechless for days.
Inqumbabane
Inqolobane is a wand like snake which is believed to be the chief cause of uncontrollable high fevers. By getting inside a person, Inqolobane slowly eats the insides of his victim and causing a lingering horrific death.


Protect Yourself from Spiritual Enemies with Fetishes

Common to many tribes in Africa is the belief that the fetishes are powerful through their ritualistic carving and sanctification. Fetishes also are made of different special substances and offered sacrifices depending on the need of the person.

A fetish is an object with perceived supernatural powers used to invoke vigilant and protective spirits to drive away evil spirits, invoke the power to afflict a person with a disease or attempt to control destiny. In Africa and throughout the world these beliefs are manifested in some of the most expressive and magical power figures ever created called fetishes.

Fetish figures throughout Africa are vessels of power that can control and inﬂuence things seen and unseen affecting destiny. Fetishes are carved with the intention to be held in the hand or set upright in the ground during a ceremony in which songs, dances, invocations, divinations, and gifts are associated with fetish devotion.
African facts Spirituality