Flies in Africa, what is African sleeping sickness? What is the tsese fly?

African trypanosomiasis, also called African sleeping sickness, is a parasitic disease spread by the tsetse fly. Symptoms include fatigue, high fever, headaches, and muscle aches. If the disease is not treated, it can cause death.

African sleeping sickness is caused by microscopic parasites of the species Trypanosoma brucei, which is found only in rural Africa. Currently, many cases go undiagnosed and unreported. Sleeping sickness is curable with medication but is fatal if left untreated.

There are two types of African sleeping sickness diseases each is named for the region of Africa in which they were found historically.

During a blood meal on the mammalian host, an infected tsetse fly injects metacyclic trypomastigotes into skin tissue. The parasites enter the lymphatic system and pass into the bloodstream. 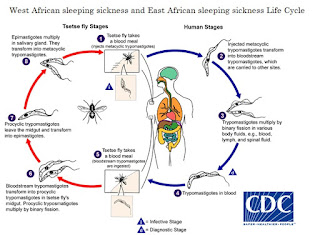 Inside the host, they transform into bloodstream trypomastigotes, are carried to other sites throughout the body, reach other blood fluids (e.g., lymph, spinal fluid), and continue the replication by binary fission.

The entire life cycle of African Trypanosomes is represented by extracellular stages. The tsetse fly becomes infected with bloodstream trypomastigotes when taking a blood meal on an infected mammalian host.

The epimastigotes reach the fly’s salivary glands and continue multiplication by binary fission.