Why is Africa Rich but Starving?

Underlying causes of hunger in Africa are the poor operation of Africa's economic and political systems, war and poor environmental polices. 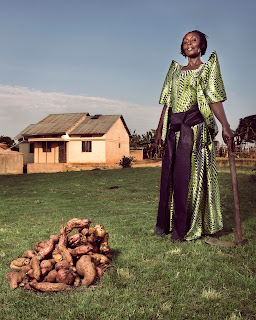 Sub-Saharan Africa is rich in fertile farming land. However, barely a fraction of fertile agricultural land is being farmed. There are three main causes of hunger in Africa, harmful economic systems, conflict, and an overexploited environment.

Why are people starving in Africa?

Barely a fraction of fertile agricultural land is being farmed, just 10% of the 400 million hectares of agricultural land in the Guinea Savannah zone that covers a large part of Africa. Fragmented regional food markets and the lack of clear and predictable policies have dissuaded the private sector from making the investments that could allow Africa to achieve its potential in food and become self-sufficient.

Underlying causes of hunger in Africa is the operation of the world’s economic and political systems. Essentially control over resources and income is based on military, political and economic power that typically ends up in the hands of a minority, who live well, while those at the bottom barely survive.

Barriers to regional trade in food staples are a major cause of hunger in Africa. Prices for basic staple food have tripled, especially of poor families living in cities: they spend the majority of their income on food. Rising food prices are also having important macroeconomic impacts on many African countries since more and more food is being imported from the global market leading to worsening balances of trade.

Just 5% of Africa’s imports of cereals come from other African countries. This issue is not going to go away. Demand for food will continue to increase, it is projected to double by 2020, and consumers will be increasingly located in Africa’s rapidly growing cities. The increase in food prices especially affects Nigeria, Ethiopia, Tanzania, DRC, Niger, Zambia, and Uganda who have some of Africa’s highest populations.

Planned and natural conflict is a principal source of human misery, including poverty and hunger. According to a World Bank study, poverty rates are 20% higher in countries affected by repeated cycles of violence over the last three decades.

Every year of violence in a country is associated with lagging poverty reduction of nearly one percentage point. People living in countries currently affected by violence are twice as likely to be undernourished and 50% more likely to be poor.

Their children are three times as likely to be out of school. Countries with serious human rights abuses or weak government effectiveness, rule of law, and control of corruption have an average 38% higher risk of civil war and significantly higher risk of extreme criminal violence.

Africa faces serious environmental challenges, including erosion, desertification, deforestation, and most importantly drought and water shortages, which have increased poverty and hunger by reducing agricultural production and people’s incomes. Humans have caused many of these challenges; the environment can be said to be overexploited.

You cannot tell a hungry child that you gave him food yesterday. - African Proverb

Barely a fraction of fertile agricultural land is being farmed, just 10% of the 400 million hectares of agricultural land in the Guinea Savannah zone that covers a large part of Africa. Cultivating this land can play a key role in satisfying the rising demand for food in Africa’s cities and ultimately elsewhere in the world. 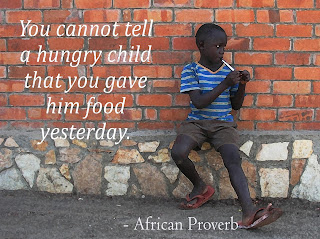