African folklore storytelling recounts the adventures of people and animals, and enlightens us on the mysteries of nature. One person does not invent folktales but they belong to the entire village, they are in the bones and the stones of the village. 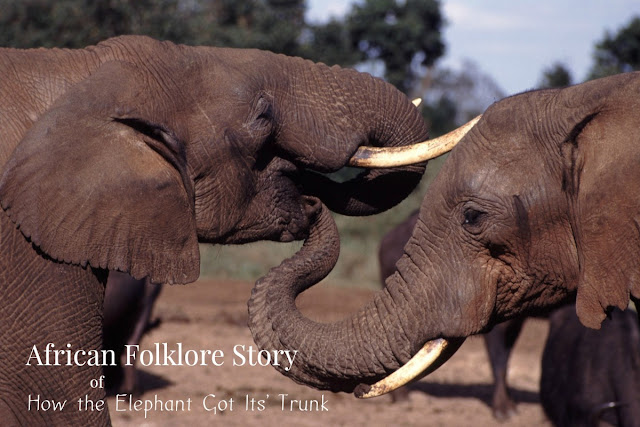 Now it is a matter of common knowledge that The elephant has a long trunk, which he uses both as a nose and as a sort of hand. It is a very useful trunk indeed. But he was once without it, and had a very ordinary short snout like other animals.

Elephant was always inquisitive and went sniffing about the forest, prying into the secrets of the other animals. One day he came across a dark hole in the ground, and into this hole, he poked his nose, to see what was there.

As a result, the Elephant’s nose was drawn out into the long trunk which he still has today.

At first, he was ashamed to appear in the forest, because of his trunk, but now the other animals envy him.

One day the monkey, which imitates everybody, looked down the same hole, thinking it would be good to have a long trunk to be able to swing from the trees by his nose. But, the big snake who lived in the hole swallowed him, and since then nobody else has tried to imitate Elephant.

Did you know?
Africa houses over 85% of the world’s elephants.

African folktales usually have sly animals and spirits as the main characters.

Anansi is one of the most beloved African folktale characters. He often takes the shape of a spider and is considered to be the spirit of all knowledge of stories.