This short African folklore story explains do not believe all you hear.

So the elders say, one day a Gazelle bought some corn at the market, and while he was boiling them at home, the Leopard paid him a visit and asked him: "Sister Gazelle, what are you cooking on the stove?"

The Gazelle replied, "I am boiling my mother's teeth."

"Really!" exclaimed the Leopard "let me taste them." So the Gazelle gave him some of the cooked corn, and the Leopard thought the food so good that he went home and pulled out all his mother's teeth, and put them to boil on the stove.

The Gazelle, passing the house, called in, and seeing the pot on the fire, asked the Leopard what he was cooking. "I am cooking my mother's teeth, but they don't get soft," answered the Leopard.

The Gazelle laughingly said, "I meant corn, and you have pulled out and are boiling all your mother's teeth!" The Leopard was so angry at what he had foolishly done but before he could chase the Gazelle, it ran away laughing at the Leopard for his foolishness in mistaking corn for teeth. 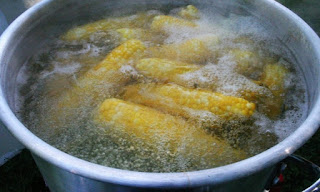 Why Some Souls Are White and Others Black African Folklore