The tradition of elongating earlobes has stretched from Africa to America. In the African Maasai tribe the slow and steady method of stretching earlobes is the method used. 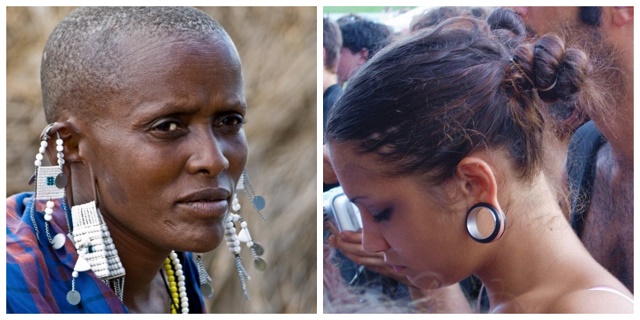 
Ear piercing and the stretching of earlobes are the first stage of initiation towards adulthood in traditional African Maasai (Masai if you live in Tanzania) culture.

While Kenya began a campaign of cultural everydayness with the Maasai, flesh tunnels and flesh plugs, have become more visible on the streets of European mainstream society.

Ear stretching and ear cartilage piercing with 1, 2, 3, 4, 5 and up piercings are common. Ear piercing kits, expanders, stretchers and even tips on perfectly stretching your ears are sold online; ear art heritage has literally stretched from Africa to America.

Everyone practices the art of ear stretching and piercing for many different reasons, beauty has always been in the eye of the beholder.

Hopefully, the traditional culture and customs of the Maasai are not limited to working in African tourism where they display their culture to visiting tourists. Maasai traditions have undergone some changes in the past few decades; their strong social traditions remain intact.

You can gradually stretch the skin using different sized tapers normally a 1mm increase every four weeks. DIY kits are more widely available and there is a much greater choice of jewelry, skin cleaning and moisturizing products and tips on how to avoid blowouts and infection.

Scalpelling and dermal punch procedures have a higher risk of infection because of the level of damage to the skin compared to ordinary piercing needles.

A dermal punch or a biopsy punch is a large gauge-piercing needle used to remove a circle of skin or tissue usually on a cartilage part of the ear. Scalpelling is performed by using a scalpel to cut a slit into the skin, and flesh is removed. Both procedures can cause thin lobes. The larger and heavier the earplug will cause the ear lobe to stretch further.


There is a point of no return but it varies. A stretched piercing can shrink back to its original size but this depends on several factors including the length of time taken to stretch and the elasticity of the skin. In some cases, if you stretch too fast or by too much, the lobe can split since ear lobes are made of skin and fat but they are sensitive organs.