Beautiful fat wife who melted away African Folktale is a very dramatic African folklore story reminding us to speak kindly to each other and celebrate our difference. 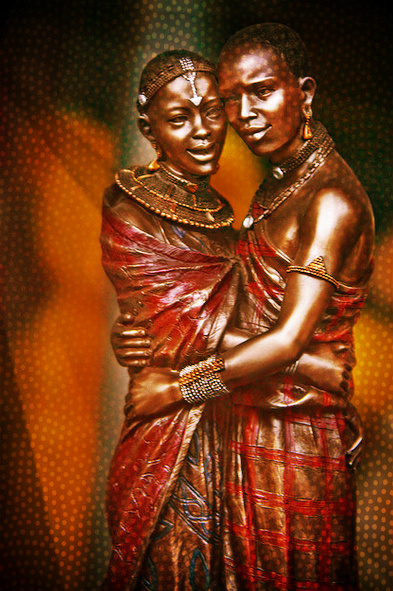 There was once a very beautiful fat woman who was made of oil. She was very beautiful, and many young wealthy farmers asked for her hand in marriage but the mother always refused, as she said it was impossible for her daughter to work on a farm, as she would melt in the sun.

At last a stranger came from a far-distant country and fell in love with the beautiful fat woman, and he promised if her mother would hand her to him that he would keep her in the shade. At last, the mother agreed, and he took his new wife away.

When he arrived at his house, his resentful mother immediately became very jealous, because when there was work to be done, firewood to be collected, or water to be carried, the fat woman stayed at home and never helped, as she was frightened of the heat.

One day when the husband was absent, the jealous mother spoke to the fat woman so badly that she finally agreed to go and work on the farm, although her little sister, whom she had brought from home with her, implored her not to go, reminding her that their mother had always told them ever since they were born that she would melt away if she went into the sun.

When the jealous mother saw this she again began teasing her, and asked her why she did not do her share of the work. At last the fat woman could stand the nagging no longer, and although her little sister tried very hard to prevent her, the fat woman went out into the sun to work, and immediately began to melt away.

There was very soon nothing left of the fat woman but one big toe, which had been covered by a leaf. This her little sister observed, and with tears in her eyes she picked up the toe, which was all that remained of the fat woman, and having covered it carefully with leaves, placed it in the bottom of her basket. When she arrived at the house the little sister placed the toe in an earthen pot, filled it with water, and covered the top up with clay.

When the husband returned, he said, "Where is my beautiful fat wife?" The little sister, crying bitterly, told him that his jealous mother had made her go out into the sun, and that she had melted away.

She then showed him the pot with the remains of her sister, and told him that her sister would come to life again in three months’ time quite complete, but he must send away his jealous mother to live with her daughter, so that there should be no more trouble; if he refused to do this, the little girl said she would take the pot back to their mother, and when her sister became complete again they would remain at home.

The husband was very upset with his mother for disobeying him and abusing his new wife. The husband decided in order to have peace in his household he would take his jealous mother to their sister house to live with her and husband.