Why is the Rabbits Nose is Slit African Folklore Story


“Long, long ago, when the world was quite young, the Lady Moon wanted someone to take a message to Men. She tried first one creature and then another, but no! They were all too busy, they couldn’t go. At last she called the Crocodile.


He is very slow and not much good, but the Lady Moon thought she would pinch his tail and make him go quickly. So she said to him: ‘Go down to humans at once and give them this message: “As I die and, dying, live, so also shall you die, and, dying, live.”

“Know how the Moon is sometimes big and round like she is now in the sky. Every night she gets smaller and smaller until there’s no more Moon: she is dead.

Then one night a silver horn hangs in the sky thin, very thin. It is the new Moon that grows, and grows, and gets beautiful and golden and so it goes on, always living, and growing, and dying, and living again.

“So the Lady Moon pinched old Oom Crocodile’s tail, and he gave one jump and off he started with the message. He went quickly while the Moon watched him, but soon he came to a bend in the road.

Round he went with a great turn, for a Crocodile’s back is stiff like a plank, he can’t bend it; and then, when he thought he was out of sight, he went slower and slower. He was so lazy! 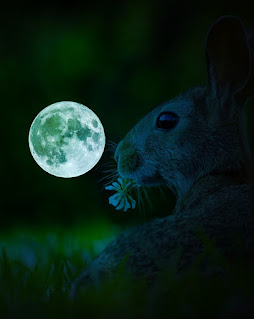 “All of a sudden, there was a noise and there was the Little Rabbit. ‘Ha! Ha! Ha!’ he laughed, ‘what is the meaning of this, where are you going in such a hurry, Oom Crocodile?”

“‘I can’t stop to speak to you, Rudo,’ said Oom Crocodile, trying to look busy and to hurry up. ‘The Lady Moon has sent me with a message to humans.’
“‘And what is the message, Oom Crocodile?”

“Ha! But that is a stupid message. And you can’t even run, Oom, you are too slow. You can only go slowly, but I go fast like the wind. Give the message to me and I will take it.”

“Very well,’ said the lazy Crocodile, ‘but you must say it over first and get it right.”

“So Rudo said the message over and over, and then he was off like the wind. Here he was! There he was! And you could only see the white of his tail and his little hind legs getting small in the distance.

At last he came to humans, and he called them together and said: ‘Listen, a wise creature comes with a message. Lady Moon sent me to tell you: “As I die and, dying, perish, so shall you also die and come wholly to an end.”

Then the humans looked at each other and were scared and said, what shall we do? What is this message that the Lady Moon has sent? “As I die and, dying, perish, so shall you also die and come wholly to an end?”

But Rudo did not care to answer any questions. He danced away on his hind legs, and laughed and laughed to think how he had cheated humans.

Then he returned again to the Moon, and she asked “What have you said to humans?’

“O, Lady Moon, I have given them your message: “Like as I die and, dying, perish, so also shall you die and come wholly to an end,” and they are all stiff with fright. Ha! Ha! Ha!’ Rudo laughed at the thought of it.

“‘What! Cried the Lady Moon, what! Did you tell them that? Child of the devil’s donkey! You must be punished.”

Lady Moon was very angry. She took a big stick and went to hit Rudo but when he saw the big stick coming near, one, two, three, he ducked and slipped away, and it caught him only on the nose.

Oh my but it was sore! Rudo forgot that the Moon was a Lady. He yelled and screamed; he jumped high into the air; he jumped with all his four feet at once; and—scratch, scratch, scratch, he was kicking, and hitting and clawing the Moon’s face till the pieces flew.

Then he felt better and ran away as hard as he could, holding his broken nose with both hands.

And that is why to-day he goes about with a split nose, and the golden face of the Lady Moon has long dark scars.

Yes, fighting is a miserable thing. It does not end when the fight is over. Afterwards there is a sore place so long and even when it is well, the ugly marks remain to show what has happened. The best thing is not to fight at all.