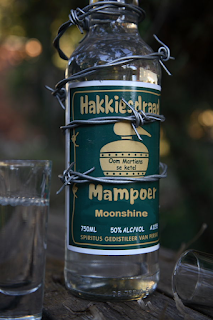 
Mampoer can be made from apricots, cherries, figs, oranges, pears, yellow peaches, plums and just about any fruit. The ideal alcohol content is around 64%; only 6-10% of the fermented juice is eventually mampoer.


It was illegal to make mampoer, however, since 2007, it became possible to create the brew only if made for personal use and not sold.


Legend has it that Mampuru chief of the Pedi people murdered his brother Sekhukuni, chased by the authorities, and gave himself sanctuary under a friend’s tribe who he knew could not refuse to help him due to South African tribal laws.


Because of this Mampuru and the chief who was forced to help him, Chief Niabela, were both hung by the authorities and Chief Niabela land divided among Boer bywoners or poor white tenet framers.

The Boer bywoners had little to no experience with farming, however; they did show a skill for making moonshine. The Boer bywoners named their powerful fruit brandy moonshine mampoer after the Mampuru because of his strength and maybe because the Boer bywonders learned the distilling process from the people of Chief Mampuru.


The legend of how the popular drink mampour got its name is unclear, however, what is clear is the Boer bywonders are known for their homemade brewing skills of fruit brandy, a skill that is celebrated to this very day.

What is a sojourner or Boer bywoners


A farmer was a poor white man who had not lived and worked on another farm's farm. In exchange for his work on the farm, the attendant sometimes received a salary but was more often paid in kind. For example, he may have free housing, a piece of a farm for his own private farming, part of the harvest or the natural growth of the livestock, a certain amount of milk a day or part of the meat if slaughtered received. He could also supplement his income by hunting. Often he went to commando with or in the place of the farm owner. Sometimes he farmed completely independently on another farm of his employer.