Lesotho the Kingdom in the Sky land and country

Highest point in the African country Lesotho and the highest mountain in southern Africa is the Thabana Ntlenyana, pronounced - Ta-bon-ya N-tea-nem-yan-na - mountain standing 3,482 meters or 2.1 miles tall. Thabana Ntlenyana mountain is around 53,222 tootsie rolls that measure 2.5 inches long. That is a sweet hike up Lesotho's Thabana Ntlenyana which has a nickname of beautiful little mountain. 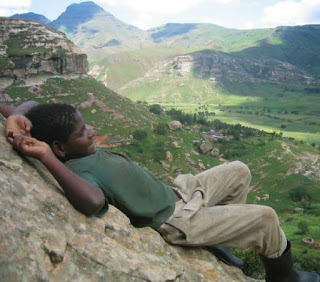 Kingdom of Lesotho name translates as the Land of the Sesotho speakers. Maseru, the capital of Lesotho etymology in the Sesotho language the name means place of red sandstones.

Lesotho has a relatively higher population density in the western half of the nation, with the capital of Maseru, and the smaller cities of Mafeteng, Teyateyaneng, and Leribe attracting the most people.

The Maloti Mountains are a mountain range of the highlands of the Kingdom of Lesotho. The Maloti Range is part of the Drakensberg system that includes ranges across large areas of South Africa.

Lesotho is the only independent state in the world that is very mountainous, in fact, more than 80% of the country is 1,800 meters or 1.1 miles above sea level. Lesotho is a landlocked enclave completely surrounded by South Africa.

Lesotho the Kingdom in the Sky land and country profile.

Thabana Ntlenyana is the highest peak in the Drakensberg Mountains.

The chain known outside Lesotho as the Maloti Mountains is properly the Front Range of the Maloti, sometimes called the Blue Mountains. It is a broad southwesterly spur from the Drakensberg Range near the northern tip of Lesotho and a few miles from its highest point, Mont aux-Sources.

The Front Range is extended almost to Lesotho’s southwestern border by another range, the Thaba Putsoa Blue-Gray Mountains; it is extended nearly to the southeastern border by the Central Range. All these mountains belong geologically to the Upper Triassic Period of the Karoo System; they are composed of sandstone and shale overlain by basalt.

Their rugged terrain causes visitors viewing them from the western plateaus to style Lesotho the Switzerland of Africa; the rough terrain has also prevented significant exploitation of the range’s mineral resources. Winter is usually dry, but winter precipitation in the maloti is virtually always snow; it snows in the mountains in every month of the year.

This and the region’s rivers make the place the source of much of southern Africa’s water; the Front Range Maloti Mountains is the divide between the watersheds of the westward-draining Orange River and the eastward-draining Caledon River.