Sale of Mopane Worms is a multimillion-dollar industry in Southern Africa. The most common ways to eat mopane worms are dried and fresh.

Mopane caterpillars or Mopani worms are an extremely popular meal and industry in South Africa, Botswana, Zambia, Zimbabwe and Namibia. 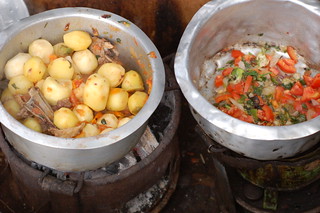 Strong aversion to eating insects is not a physical reaction, but one of a mental dislike. Some cultures are programmed to when you see an insect kill it, not eat! Mental repulsion about eating insects may be a cultural issue since certain societies are raised to think it is uncivilized to eat insects. But why?

Why is it ethically acceptable in certain societies to eat an insect but in another society is considered taboo. The taste is not the issue, but the "thought" of eating insects is the real issue.

Entomophagy is the technical term for eating insects. Insects are rich in protein, sometimes containing three times the amount of protein as beef, and they can be barbecued, fried with tomatoes, onions and garlic and curried.

Nevertheless, in some cultures eating insects is a cultural taboo. According to the Guardian online news journal "Two billion people already eat insects as part of their regular diet – bugs may not sound appealing, but once upon a time neither did sushi."

Mopane worms are a popular dish in South Africa, Botswana, Zambia, Zimbabwe, and Namibia. Overharvesting has recently become an issue, it may take up to 50 small larvae to make a meal for one person while five large larvae might be enough for an adult.

The harvesting of small larvae is wasteful and is strongly discouraged in some areas. The Mopane worm is the large brightly colored caterpillar of the emperor moth, which is one of the world’s largest moths. It is called a mopane worm because it feeds on the leaves of mopane trees.

The Mopane worms are as long as a hand and as thick as a cigar and are harvested by hand twice a year. Harvesters squeeze the worms to remove the bright green innards, boiled in salty water, and dried in sun.

Mopane worms are eaten fresh, as a dried snack or cooked in a stew; they tend to soak up the flavor of the dish. Mopane caterpillars or Mopani worms are an extremely popular meal and industry in South Africa, Botswana, Zambia, Zimbabwe and Namibia.

Soak dried mopanes in warm water for 2 hours to remove some salt changing water every 30 minutes, throw away water. In a large pot on high heat add oil and sauté onions until translucent.

Add remaining ingredients except mopane and stew on medium heat about 20 minutes until the potato is soft. Add mopane and cook until they have softened a bit but still are a little crunchy. Serve over rice or with bread.

Cooking Worms in Southern Africa Fact
In Zimbabwe, mopane worms are a typical ingredient for many recipes.
Mopane worm is a large edible caterpillar of the Gonimbrasia belina, a species of emperor moth.
Mopane worms are known as infinkubala and ifishimu in Zambia.