Sambal is a spicy thick relish packed with a hot peppery flavor and seasoned vegetables. Sambal is made from various ingredients and may be fresh or cooked. It is commonly made from vegetables, chili's, and onions. Sambal is used similarly to salsa. Serve with any dish.

Sambal is a spicy thick relish

Toss carrots and onions with lemon juice and 1 teaspoon salt, let sit 1/2 hour, then squeeze with hands and discard any excess liquid. Combine with remaining ingredients and mix well. Allow sitting refrigerated for several hours before serving. Serve with any meat or seafood dish. Sambal is used similarly to salsa. 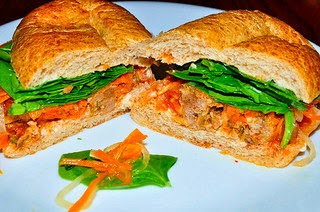