Nigerian author Amos Tutuola was born in the Southwest State of Abeokuta, Nigeria, near the Ogun River in 1920.
His parents earned meager wages as cocoa farmers in the area. Tutuola had eight children and held many odd jobs as he grew up but mainly he worked as a records keeper for the Nigerian Broadcasting Company.

Tutuola's most famous novels are The Palm-Wine Drinkard written in 1946 and My Life in the Bush of Ghosts in 1954.
Tutuola was Nigeria's first internationally recognized author writing in English. The Palm Wine Drinkard has been translated into more than 15 different languages.

Most of his writings were based on Yoruba folktales however; some fellow Nigerians looked on Tutuola writings as using uncivilized language in his books.
Tutuola was also criticized using for clichéd examples of Nigerian culture and writing folktales was not looked upon as true fine art.
Despite his fellow Nigerians opinion on his writing style, in 1952 the London printing house of Faber and Faber bought Tutuola’s The Palm-Wine Drinkard.

Welsh poet Dylan Thomas in the Observer newspaper called the novel “brief, thronged, the grisly and bewitching story” bringing more attention to the book and to the attention of American and French literary critics.
Notable later works of Tutuola were The Witch-Herbalist of the Remote Town was written in 1981, Yoruba Folktales in 1986 and The Village Witch Doctor and Other Stories in 1990. 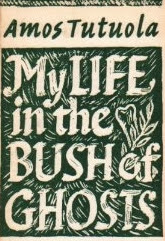 Tutuola is one of the founders of the Mbari Club, the writers' and publishers' organization in Ibadan, Nigeria. In Ibadan 1961, the capital city of Oyo state, Nigeria, the Mbari Club was created for African writers, artists, and musicians. Mbari is the Igbo’s word for creation. Amos Tutuola passed away on June 8, 1997, at the age of 76.


My Life in the Bush of Ghosts is the journey of a young African boy who in the forest is left alone and strays into the world of ghosts.
The Palm-Wine Drinkard draws from the Yoruba folktale traditions told to him by his mother and aunts, Tutuola describes the journey of an ardent palm wine drinker through a truly nightmarish voyage.