African Boys Human Trafficking Tier 2 and 3 CountriesList of Tier 2 and 3 human trafficking African countries explained. Trafficking people victimize millions of men, women, boys, and girls worldwide. Although precise numbers are unknown, recent estimates of the number of people enslaved in sex or labor exploitation and enslaved for the removal of organs range from 12 to 27 million.

Human trafficking is a violation of human rights that reduces human beings to the status of commodities to be bought and sold. It is fueled by demand for money, prostitution and cheap labor. Human trafficking is facilitated by greed, porous borders, absent rule of law, failure to prosecute traffickers, the complicity of corrupt officials, and misuse of modern communication technology.

There are regional variations in trafficking trends. Countries in Africa and in Asia generally intercept more cases of trafficking for forced labor, while sexual exploitation is somewhat more frequent in Europe and in the Americas. The United States is a destination and transit point for some trafficking victims.
Human trafficking rates are high in New York, Texas, California, and Florida. Human trafficking puts in danger millions of children, women, and men to prostitution, pornography, sex tourism, and forced domestic service.


Trafficking humans can impede efforts to improve health, increase economic growth, achieve gender equality and women’s empowerment and can pose a threat to lifetime prospects for youth. When trading in of children is thought of, girls come to mind but boys are one-third of all trafficked children.
Trafficking in persons is modern-day slavery, involving victims who are forced, defrauded, or coerced into labor or sexual exploitation. The International Labor Organization (ILO), the UN agency charged with addressing labor standards, employment, and social protection issues, estimated in 2011 that 20.9 million people worldwide were victims of forced labor, bonded labor, forced child labor, sexual servitude, and involuntary servitude.
Human trafficking is a multi-dimensional threat, depriving people of their human rights and freedoms, risking global health, promoting social breakdown, inhibiting development by depriving countries of their human capital, and helping fuel the growth of organized crime. In 2000, the US Congress passed the Trafficking Victims Protection Act (TVPA), reauthorized in 2003 and 2005, which provides tools for the US to combat trafficking in persons, both domestically and abroad.
One of the law's key components is the creation of the US Department of State's annual Trafficking in Persons Report, which assesses the government response (i.e., the current situation) in some 150 countries with a significant number of victims trafficked across their borders who are recruited, harbored, transported, provided, or obtained for forced labor or sexual exploitation.
Countries in the annual report are rated in three tiers, based on government efforts to combat trafficking. The countries identified in this entry are those listed in the 2010 Trafficking in Persons Report as Tier 2 Watch List or Tier 3 based on the following tier rating definitions:

Tier 2 watch list African countries do not fully comply with the minimum standards for the elimination of human trafficking but are making significant efforts to do so.
These countries meet one of the following criteria:

1. They display a high or significantly increasing number of victims,

2. They have failed to provide evidence of increasing efforts to combat trafficking in persons, or,

3. They have committed to take action over the next year. 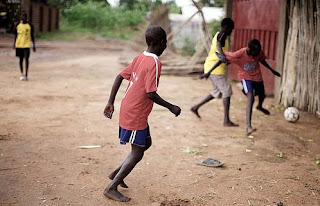