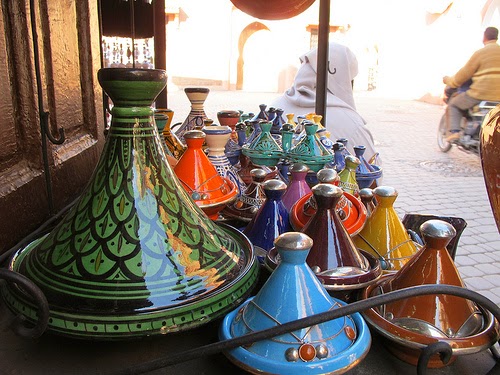 Ceramic tagines are exquisite examples of Moroccan artisan ship, and many are show pieces as well as functional cooking vessels.

Moroccan tagines make delicious family meals, and the presentation in a clay or glazed tagine is impressive enough for company. Try this basic Chicken Tagine with Potatoes and Carrots recipe.

Tagines are primarily used to slow-cook savory stews and vegetable dishes.
Because the domed or cone-shaped lid of the tagine traps steam and returns the condensed liquid to the pot, a minimal amount of water is needed to cook meats and vegetables to buttery-tenderness.
This method of cooking is very practical in areas where water supplies are limited or where public water is not yet available.
The traditional method of cooking with a tagine is to place the tagine over coals. Large bricks of charcoal are purchased specifically for their ability to stay hot for hours.
Smaller pieces of charcoal are reserved for cooking brochettes and other grilled meats.

Using a Tagine at Home

Before using a tagine for the first time, you'll want to season it. Use a tagine in a low heat oven or place it on a gas or electric stove top.
Use the lowest heat necessary to keep the stew simmering gently. A diffuser – a circular piece of aluminum placed between the tagine and burner – is highly recommended to buffer and more evenly distribute the stove's heat.
Moroccan tagines make delicious family meals, and the presentation in a clay or glazed tagine is impressive enough for company. Try this basic Chicken Tagine with Potatoes and Carrots recipe.

Directions
Pour enough of the olive oil into the tagine to coat the bottom. Layer the onion rings across the bottom of the tagine, and arrange the carrots on top of the onions.

Use a diffuser if you like, but as long as the heat is kept low, a traditional tagine should be safe on a burner. Cover the tagine, and bring the dish to a simmer. (Be patient, it takes a good 10 minutes for the tagine to heat up to this point.)

Adjust the heat to medium-low or low, checking occasionally to be sure that you can still hear the tagine simmering. Tagine is done when potatoes are fork tender, about 10 minutes. You can use a stew pot instead of a tagine, just add an extra 1 cup of broth to the recipe. Serve over cooked rice or couscous.