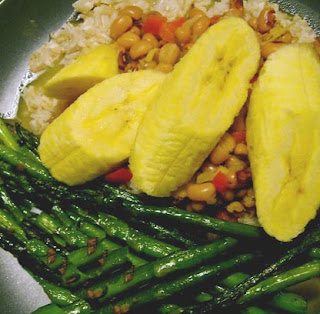 Many plantain recipes call for frying, but this method increases the calorie content.

Directions
In a large pot of salted boiling water or vegetable broth carefully drop washed stemmed unpeeled plantains in boiling water. Cook for 15- 20 minutes until tender. Peel before serving and sprinkle with salt, pepper, cumin, red pepper or any spice of your choice.
About plantains.
Plantains look like a larger version of a banana but have thicker peels and starchier fruit. Plantains are often used in African cooking and are a major food staple in many regions of Africa.