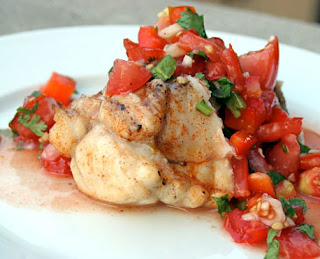 Sautéed fish is a traditional fish recipe among the Kru San-Pédro communities on coastal Côte d’Ivoire and is the perfect new recipe to try with friends. Kru people are an indigenous people of Africa. The Kru belong to small independent tribal communities in Liberia, Côte d’Ivoire and Sierra Leone whose occupations were predominantly experts in navigating and sailing the Atlantic Ocean. Kru San-Pédro Sautéed Fish Fishing in Côte d’Ivoire is big business; from trawling fishing grounds to family fisheries casting nets to lone fishermen using dugout canoes. Côte d’Ivoire is located in Western Africa bordering the North Atlantic Ocean, sharing it’s boarders with Burkina Faso, Ghana, Guinea, Liberia, and Mali. The small 515 kilometer or 320 mile Côte d’Ivoire coast line is the 23 rd longest in Africa. In this 28 th largest African country lives the highest concentration of Ivoirian people who reside in and around the port town cities on the Atlantic coast. San-Pédro is a port town in so
Learn More
More posts