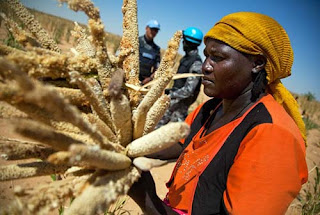 Women can farm the land but land ownership is not for women in Sierra Leone Africa. Even though laws in Sierra Leone allows foreign investors to own and lease land, native Sierra Leonean women can not. Women's land ownership rights in Africa, in Sierra Leone outdated government policies and tribal customs often deny women's rights to own land. Land in Sierra Leone is characterized by a dual tenure system that dates as far back as the colonial era the British Crown Colony is known as Freetown was established in 1808 and the later claim over the native populations land was named the Protectorate in 1896. The British instituted the freehold and leasehold tenure system in and around the capital of Freetown. Freehold or fee simple tenure is the legal right to own a piece of property without any limitations on its use. The leasehold tenure system is when land may be leased or rented by its owner to another party. Land is not for Women in West Africa’s Sierra Leone Upon a
Learn More

Usage of Amen and Ashe or Ase Ashe to Amen learn about the custom of using the words Ashe and Amen historically. Where did the word Amen and Ashe come from why is it said and what does it mean? In Judaism, 3,500 years old and Christian religions 2,000 years old, Amen, means may it be so. In the African Yoruba language among the Yoruba people whose culture is as old as time, Ashe or Ase means may it be so. Ase or Ashe means power, commandment, and authority, the ability to make whatever one says happen from the spiritual to the physical realm. In the Yoruba language, Ashe is omnipresent spiritual energy. Followers of Judaism and Christian religions use the word Amen. It is the word utilized to end prayers as an affirmation for the requests to be provided by God. Yoruba is as old as time, Ashe refers to the life force within all living things, the spark that animates life. It is used as a term used in the same manner as Amen at the end of appeals and prayers as an affirmati
Learn More
More posts